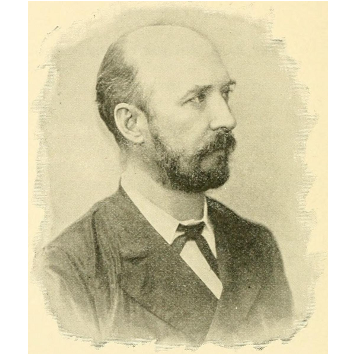 The advent of the autochthonous postal stamp in China and the organisation of a postal service similar to the European model came about thanks to the Chinese Imperial Maritime Customs Service and its second Inspector-General, the Englishman Robert Hart. The...

The advent of the autochthonous postal stamp in China and the organisation of a postal service similar to the European model came about thanks to the Chinese Imperial Maritime Customs Service and its second Inspector-General, the Englishman Robert Hart. The customs service was created by the Imperial government in 1858, on the urging of Western consuls, to bring order to the chaos that existed regarding tariffs in the ports that had been opened up to international trade. Robert Hart (1835-1911), who served the government of the Qing court for nearly 40 years, was one of the artificers behind the modernisation of the Imperial administration. One of the initiatives he proposed was to create a postal system that would depend on the customs service, and which began by operating in 1876 solely between these ports, and then from 1878 spread throughout the entire territory. In 1896, the postal service became standardised and was known as the Chinese Imperial Post.

The first Chinese stamps, strictly speaking, are the ones known to the world of philately as the Candarins. A Candarin was a fraction of a Tael, the monetary currency used at that time in China. The first series of Candarins was issued in Shanghai at some point between 1876 and 1878. It was a series of three stamps, printed using lithography (or copperplate) in sheets of 20. The one Candarin stamp was printed in green, the three Candarin in red, and the five Candarin in yellow. All three series feature the same illustration of a dragon, an emblematic animal in Chinese popular iconography and the symbol of imperial power. While there has been a great deal of speculation over the identity of the artist who drew this illustration, it is now believed to have been produced by an anonymous Chinese illustrator. 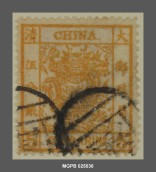 The stamps also feature the word CHINA placed between the Chinese characters da and qing (大清) – “The great Qing”, referring to the last imperial dynasty. At each side of the stamps (also in Chinese characters), on the right there is the monetary value of the stamp, and on the left, the characters for Post Office. At the bottom, the value of each stamp is shown in Arabic numerals, and in the centre, the word CANDARIN written in Latin. Fortunately, an example of each of these three stamps has been conserved in the Barcelona Post Office Museum. 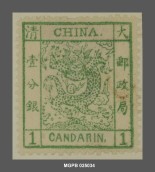 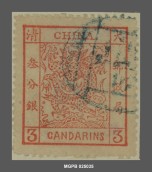 In 1885, a second series of Candarin stamps was issued, also in Shanghai. While they are smaller in size than the first series, the dragon and all the other graphic elements are much more carefully rendered. The stamps were printed on sheets of 40 on paper with a watermark that shows the symbols yin (阴) and yang (阳) – the expression of the duality of the universe. In this series, the one Candarin stamps are green; the three Candarins are mauve, and the fives are brownish in tone. One of each colour has also been conserved in the Barcelona Post Office Museum. 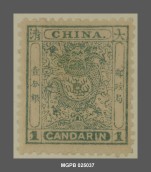 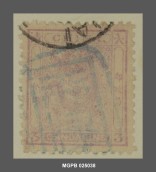 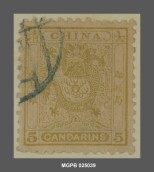 In the early days of stamps in China, the Chinese people called them long tou (龙头), or rather, “dragon’s heads”, instead of using the actual Chinese word for stamp – you piao (邮票).

Up until 1922, when the Chinese government assumed complete control over the postal system, Chinese stamps circulated freely alongside those of the colonial powers, which featured overprints made especially for their use in China.