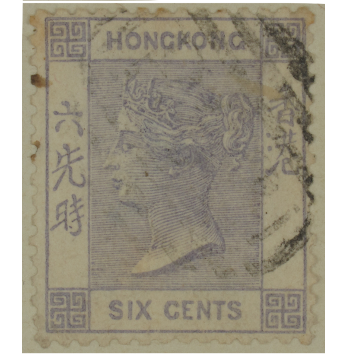 As imperialism spread across the world in the second half of the 19th century, China became mired in a series of violent conflicts with the Western powers and with Japan, as they each strove to colonise China. Following the successive... 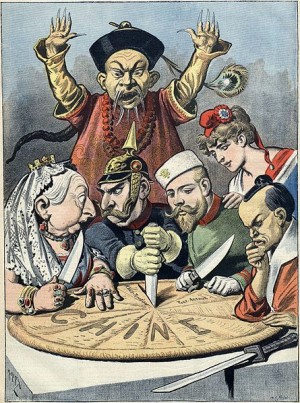 Illustration published in Le Petit Journal showing Queen Victoria of England, Wilhelm II of Germany, Nicholas II of Russia, Marianne of France and the Emperor of Japan dividing up China as if it were a cake, 1898. Source: Wikipedia

As imperialism spread across the world in the second half of the 19th century, China became mired in a series of violent conflicts with the Western powers and with Japan, as they each strove to colonise China. Following the successive defeats suffered by the Chinese Empire in the Opium Wars, the victors obtained not only massive financial compensation, but also a series of privileges. At the territorial level, this took the form of opening up ports to overseas trade and the granting of extraterritorial rights to foreign citizens residing at these ports (such as traders, adventurers, diplomats and sailors). In these strategic conclaves (or “concessions”) the occupying countries soon opened their own post offices, just as they had done in the other lands they had colonised around the world, in Australia, Africa and the Asian subcontinent. The first foreign power to do so on Chinese soil was Great Britain, on Hong Kong Island, in 1841, one year before it became British territory.

With respect to the stamps issued by the colonial powers for circulation inside China and abroad, Britain was ahead of the rest. In 1862, the Hong Kong Royal Mail issued its first series of stamps, which featured the head of Queen Victoria of England and the words “Hong Kong” at the bottom of the stamp. The Hong Kong stamps were used in all the post offices that Britain opened in the different ports. In 1917, the design of the stamps included an overprint of the word CHINA.

France was the second Western country to open post offices in China, in 1862. The French government issued its first Paix et commerce series of stamps (or Sage type) overprinted with CHINE in 1894.  In around 1900, postal agencies began to open in southern China which depended administratively on the province of French Indochina. These agencies issued the Navigation et Commerce series of stamps, specially printed for all of France’s colonial territories, and with their own overprints. Thus we can find stamps overprinted with CANTON, PAKHOY and HOIHAO, some examples of which can be found in the Barcelona Post Office Museum. 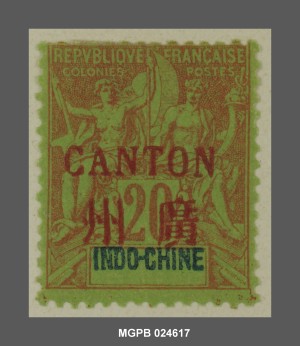 A 20 centimes, from the series Navigation et Commerce, specially issued for all of France’s colonies, overprinted, 1901-1902. Ramon Marull Collection

Germany opened its first post office in Shanghai in 1886, and in 1898 issued its first stamps with the diagonal overprint CHINA. In 1900 the overprint became horizontal.

Russia was a different case in question. Ever since the 18th century a regular postal service had existed between the Czarist and the Chinese empires, following the Treaty of Kyakhta (1727). The Treaty established a series of points, such as drawing the borders between Russian Siberia and the Chinese territories of Mongolia and Manchuria. The first Russian post offices opened in the north of China in 1870, in Peking, Kalgan, Tianjin and Urga (Ulan Bator). At first, ordinary Russian stamps were used, but in 1899, stamps were issued featuring a diagonal overprint of the word CHINA in Cyrillic script. 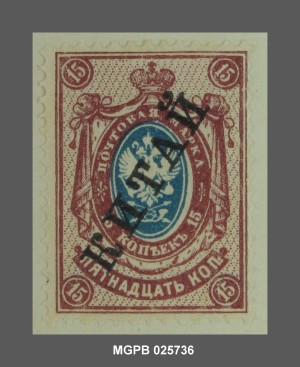 Japan opened its first postal agency in Shanghai in 1876. Until 1899 it used regular Japanese stamps, without overprints, in Chinese territories.

Apart from the aforementioned foreign powers (which were the ones with the greatest colonial interests and which fought to increase their spheres of influence), other countries such as Italy, the United States of America and the Austro-Hungarian Empire also opened their own post offices and began issuing their own series of stamps featuring overprints of the word “China” in their own languages. The Marull collection includes some curious examples of these, such as the stamps used by the British troops in India who were sent to Peking in 1900 (as part of the Eight Nation Alliance) to put down the Boxer Rebellion. The stamps used by this expeditionary force were of the ordinary colonial India type, but with the addition of a horizontal overprint of the letters CEF (China Expeditionary Forces) 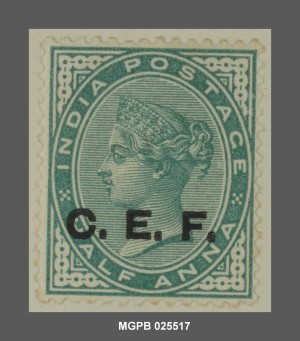 A half Anna for the China Expeditionary Force (CEF) of the British government in India, 1900. Ramon Marull Collection

Foreign stamps ceased circulating in 1922, when all the colonial powers’ post offices in Chinese territory were closed, and the Chinese government assumed complete control of the postal system.