Iconic buildings and spaces Back |   Items 3 of 3 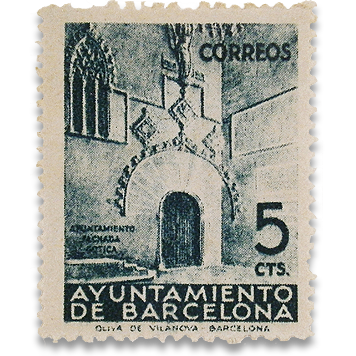 The following stamp has represented on it the gothic façade of Ajuntament de Barcelona, located in Ciutat Street. The stamp’s etching plate was done on the basis of an original drawing owned by the family of Joan Baptista Cendrós (Barcelona 1916-1986), entrepreneur and promoter, a great fan of philatelic collecting and one of the founders of Òmnium Cultural entity.

In 1939, Consell de Cent (The Council of One Hundred, a governamental institution of Barcelona) entrusted the façade of the municipal government to the master builder Arnau Bargués. The confidence in Bargués lies in his excellent work done in Marti l’Humà Palace, in Poblet, or in the Cathedral of Barcelona, among others.

The façade’s construction was constrained by the space it had to occupy. At that time, Sant Jaume Square did not exist, and its place was occupied by a church dedicated to Saint James (that is the reason of the square’s name). According to some authors, the horizontal aspect that it has was due to the fact that he did not wanted to compete neither in monumentality nor in presence with the church.

The façade’s sculptural motifs belong to Jordi Johan, a recognised artist within the Catalan Gothic. Over the entrance door are placed three coats of arms in a diamond shape which represent the arms of Peter the Ceremonious, flanked on both sides by the coat of arms of Ajuntament de Barcelona. On top over it, the archangel Saint Raphael becomes the protagonist, over a bracket where a monster attacked by two birds appears. The history of art explains that this sculpture was a donation from an individual to the municipal government. The only requirement he demanded was to never be moved of its place, and six hundred years later we can confirm that his will was kept. The work is attributed to Pere Sanglada because of its style and also because he was comissioned to melt the bronze wings of the archangel.

The majesty of this so singular space was threatened during the 19th century. The need for a new access to the Council was eased by the destruction of Saint James church in 1823. Josep Mas i Vila, the municipal architect, considered that a more monumental façade had to be created, and he ordered to destroy this façade. The destruction was stopped thanks to the intercession of two great cultural institutions at that time, the Royal Academy of Letters and the Royal Academy of Fine Arts of Sant Jordi. But the attempts to destroy it were restarted in 1852, when the First Work Committee started the removal works for the door in Sant Miquel’s Square. Again, the social pressure got the dismantling stoppage. Unfortunately, they could not avoid the cut off the door as we can see it today.