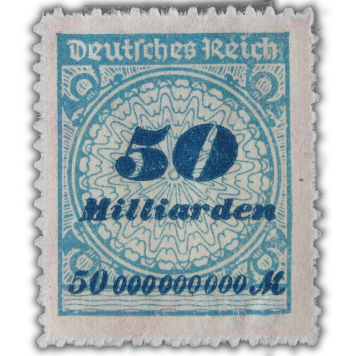 Germany has always been a country with a strong spirit that has led it to stand on its two own feet in very difficult situations. It is also true that its strong identity feeling has made it one of the...

Right at the end of the First World War, Germany was going through a very hard moment. Defeated by the allied powers, it was forced to sign the Treaty of Versailles, the international agreement that brought the end of the Great War (1914-1918). Germany, as the defeated nation, had to assume the restoration of the damage caused by the conflict. The winning countries were not going through a good situation as the war had left behind devastation and debts to third countries, and so they were not in a position to give the Germans any break. The amounts and deadlines agreed for the payments were almost impossible to fulfil.

Another aggravating factor was the role of industry during and after the conflict. During this, the business activities were mainly focused on the supplying of war material. However, once the war was ended, the restructuring of the industry was necessary in order to satisfy the daily needs of citizens, although there were no means to do it. The mismatch between supply and demand increased the tension between an economy grounded on the art of war and the needs of a society willing to get back to normality.

This convulsed period of deep crisis was assumed by the Republic of Weimar (November 1918 – January 1933) which had to face the mismatches between internal finances, the increasing inflation, the lack of job opportunities and the consequences of the Great War. The government, aiming to face the needs resulting from this situation, decided to issue more paper money. But this new issue, known as papiermark, was not supported by the gold reserves of the country. During that historic period it was essential that all currency fulfilled the gold standard in order to ensure its value.

Despite the currency devaluation during the first half of 1921, the currency remained relatively stable; each dollar had a correspondence of 60 Marks. But the situation changed in August the same year, London required an annual payment of 2000 millions of marks as a compensation for the damages incurred during the war. The massive drain of golmarks abroad appealed the need to issue more papiermark, leading to an exponential devaluation of the mark. At the beginning of 1922 one dollar equalled to 320 marks and at the end of the same year the proportion would increase to 8000 marks.

The economical fluctuations made money be spent very fasts. A worker could be paid twice and even three times a day. The enormous amount of notes usually made people carry their salary in a case or spend it quickly before its devaluation. For instance, in 1923 a loaf of bread could cost 80,000 million marks. This phenomenon of high increment of prices on goods to millions is known as hyperinflation. The economist Xavier Sala Martí identifies this phenomenon as the heart attacks of the economies.

Stamps are the proof of payment of a shipment fee. The same happens with paper money, it is another way to represent money amounts. Thus, it is logical that philatelic issues are also affected by the economical fluctuations.

During a period of the Republic of Weimar stamps were continuously overloaded with higher and higher prices even costing thousands of millions marks. This overprinting was issued in Berlin but also in other post offices around the country such as Breslau, Frankfurt, Hamburg, Leipzig or Munich. The Marull’s collection presents a series of issues of 1923 that give example of that situation. It is all available for consultation by clicking the tab “Discover the collection”, selecting Germany for “Place of origin” and filtering by year.

Government had to look for solutions in order to stop the price escalation and the uncontrolled issuing of currency notes with no value. The arrival of a new currency, the reichsmark, was supported by a mortgage on the land and goods of the nation. The change of referent enabled the issuing of paper money with guarantee and value. The reichsmark introduced a new way to support the economy with no need of the gold standard, nowadays abandoned around the world.

At the end of 1923 Germany managed to redirect their monetary crisis. However, the experienced situation deeply affected the country society. Not in vain it was one of the arguments most used by Hitler, 10 year later, to achieve the power.