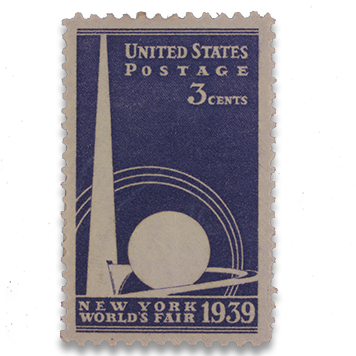 New York Exhibition in 1939 was opened under the slogan “The World of Tomorrow”. History will remember it as the promise of a better future amongst an adverse context.

This stamp celebrates the exposition in New York, opened up in April 1939, when the United States was still suffering the Great Depression’s last strokes and the biggest armed conflict ever known was brewing. The present in 1939 was presenting itself as disappointing, and the immediate future heralded a bleak future, a very unpredictable future. In order to counteract this negative situation, the city organised a big fair under the slogan “The World of Tomorrow”. It had a good public acclaim because of the fact that promising an auspicious and peaceful future proved to be encouraging for the vast majority of visitors. The fair had two stages: the first one from 30 April to 31 October 1939, the second one from 11 May to 27 October, when the exhibition was opened again to the public.

More than 50 countries around the world took part, including international organizations as the League of Nations, at a time when the world peace was threatened by opposing ideologies. As it is well known, peace became impossible to attain, and soon after the opening, the Second World War broke. Some pavilions, as the ones of Poland and the Czech Republic, could not reopen during the second stage because they were immersed in the conflict.

The exposition was not only used to recover a damaged space in New York city and to create business and new jobs, but also to lift up the population spirits, and to defend the countries and cultures unity.

Nevertheless, there was a greater and more important objective: the entire marketing, the entire show and the entire deployment of resources was joined together with the purpose of introducing and educating people for a future that had already arrived, that was already possible. It was necessary to bring science and technology closer to the population so they could be able to perceive the progresses, to experience how their life could be easier. In this historical moment, when the streets’ electrical lighting was not widespread, the big companies brought to the market such innovative products, as the television, the car or the air conditioning which created fascination in the visitor. It was presented a city model in which auto-mobiles ran through lighted streets with big spotlights, where people lived in skyscrapers and enjoyed domestic appliances that allowed them to have more free time. The future world showed in 1939 was one with a society that had access to the products derived from a technology and industry designed for the massive consumption. Of course, there will be necessary 20 years for this dream to come true, the 1939’s world of tomorrow was the world of American middle class in the sixties.

The modern image presented in the stamp captures the vision of this bright and attractive future: a background painted in solid colour with white and synthetic silhouettes, the two most representative icons of the Fair, the Trylon and The Perisphere.

The style of the design is related to the Art Deco, it is printed in purple colour, with rotatory presses using sheets of fifty copies, and the upper and lower laterals are framed by white lines. It is important to stress the fact that the American President at the time, Franklin D. Roosevelt, philatelic amateur and great collector, took part personally in the design.

Many countries that took part also issued commemorative stamps for the event. Marull’s collection has in its fund copies published in order to commemorate the event from such varied places as Iceland, Romania, France or the Soviet Union. The vignettes make reference to the respective countries pavilions, or to Trylon and Perisphere structures, previously commented. The former Asian possessions from the occupying countries, as France or Portugal, issued copies for the event or overprinted others pre-existing. Other copies can be consulted, as the one from Indochina, Guangzhouwan or Macau.

Infortunately, the Spanish presence at the exposition was non-existent because its pavilion did not open. The Second Spanish Republic tried hard to maintain the foreign propaganda with the outside world with the sole aim of achieving allies against the fascist advance, but the end of the Civil War made impossible the opening of the pavilion. There is a curious and miserable story: the frescoes painted by Luis Quintanilla for the pavilion were found out in 1990 during a dismantling of a gay porn cinema in New York. The case was so scandalous that even Jesús Calvo made a documentary named The Other Guernicas. Another story that will remain for posterity is the image of Salvador Dalí handing out pamphlets about the Declaration of the Independence of Imagination and Rights of Man to His Own Madness overflying the fair in a light aircraft. It seems that he did not like the structural changes that the organisation required him to do on his architectural project The Dream of Venus.

The popular culture will also be inspired by the exhibition to present the future in a positive, shining and happy way. If you wish to see a video about the fair made by the New York Public Library, click here.

New York Exhibition had a great influence over different American generations, and, by extension, over the rest of the world too. Roosevelt government’s objective went beyond the apparently expendable economical investment; it would be an injection of hope and identity reaffirmation within an adverse socio-economical context.