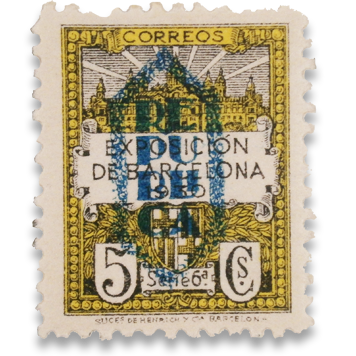 The impact of this event was a key for Montjuic Mountain’s urban transformation. Further explanations are provided below.

The success of the Universal Exhibition in Barcelona, held in the grounds of Ciutadella park in 1888, meant some years later an additional impulse for the city’s main economical societies in order to claim the possibility of doing a second one. After many discussions about what would be the better location for the event, and other questions, it was finally decided that it would be held in Montjuic Mountain, from 20 May 1929 to 15 January 1930. The exhibition’s great magnificence would have a great urban impact on the city, and would withdraw some buildings that today remain as testimonies of that moment, as the Palau Nacional de Montjuic (which helds today the Museu Nacional d’Art de Catalunya (MNAC)), La font Màgica, or Plaça Espanya.

The trust in this kind of exhibition took a considerable economical and technical effort by the municipal and estate administration. The urban projection in the mountain’s surroundings, the construction of different buildings and the lands’ conditioning made insufficient the fifty million pesetas granted by the Spanish state. This association was possible thanks to the depreciable public debt issuance.

The need of introducing new taxes, among other measures, lead to a surcharge of five cents in the correspondence within Barcelona including up to twenty-five kilometres. Thus, as the postage rate within the city was twenty-five cents, the surcharge would be the 20% of the rate.

But the unusual fact about this situation was that, for the first time, the estate lent punctually a State contribution to a local authority, Ajuntament de Barcelona. That was why the issues took place between 1929 and 1945, when the additional charge was removed.

The stamp from Marull’s collection is part of this stamps group with compulsory surcharge in Barcelona. The depicted motif represented is the façade of Montjuic Palace, with seven beams coming from its rear, as we see it today. In the central area the reasons of the issue, the International Exhibition, and the year are given. The lithography belongs to Sucesores de Henrich y Cia. printing firm, a company that no longer exists.

The name “REPUBLICA” that appears on top of the stamp gives us a little more of information. It was decided in the official decree of 5 August 1931 to commemorate the Republic’s advent through a philatelic issuing.  For this occasion a new model would not be created but it will be used the stamp in green and black from the sixth series, and it will be named with a distinctive symbol. Each Catalan province will have the same message with its respective coat of arms on the background. The stamps appeared in public disclosure the same September 11, as a tribute to the Catalan national holiday.