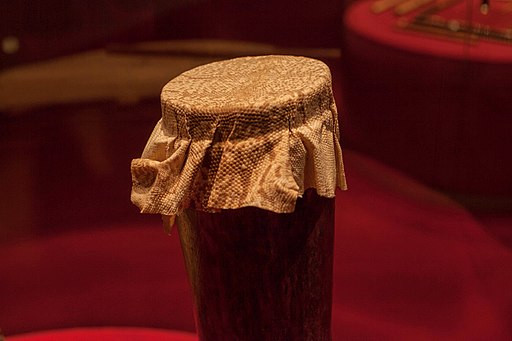 A reptile for an instrument: the restoration of the kundu MDMB 1370

When we restore the Museum's instruments, one of the first criteria to keep in mind is the use of materials that are as similar as possible to the original ones. In the case of our kundu (MDMB 1370) we needed to replace the drum’s skin, so we could display the instrument as it really is. After performing the pertinent searches, we realized that it was going to be no easy task.

In our lands, drum skins are made, logically, with our native animal skins. We supposed that the typical species from here such as cow or goat would not be the same as in Papua New Guinea, but what we didn’t imagine was that the material used had been the skin of a reptile, especially considering the diameter of the skin required. It seems that the reptiles of those lands are a bit larger than our common geckos!

The control of endangered species and illegal trade in animals is increasingly more stringent. We had talked a few times about this subject with our colleagues at the Museum of Zoology in Barcelona, since many ancient instruments incorporate currently prohibited materials such as tortoiseshell or ivory. Thanks to this collaboration, we managed to fill in some gaps in the decoration of the Museum’s Hauslaib claviorgan. After a long process of dealing with the Barcelona Customs Office, which often confiscates illegal materials that arrive in the country, we obtained the desired piece. 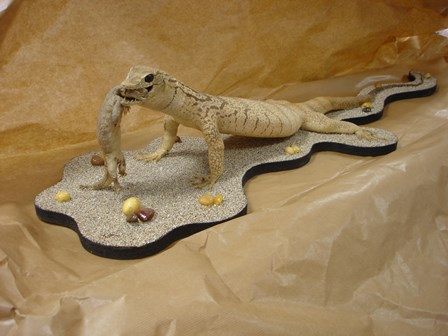 It was the stuffed figure of a species of protected reptile that had been confiscated. From that point on, it became our colleagues at the Museum of Zoology’s job to prepare the skin so we could put it on the drum. Once we had all the skin stretched out and more flexible, we could use it as the replacement. We used hot glue to stick the skin on the kundu drum and cut off the excess. This instrument has been on display in one of the first showcases of the Museum's permanent exhibition since 2007.

However, despite the fact that the skin given to us by the Zoological Museum's colleagues was more flexible than when we got it from customs, since it had come from a desiccated animal, it had lost some of its characteristics and we won’t be able to use the instrument in an authentic manner. We’ve been able to restore an instrument so that the public can see what an original kundu looks like, but we cannot enjoy the instrument’s real sound. We can get close to it, but it’ll just be in our imagination, not the real thing. 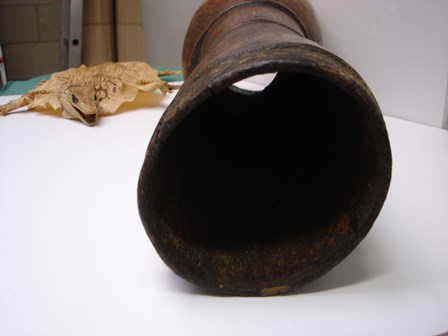 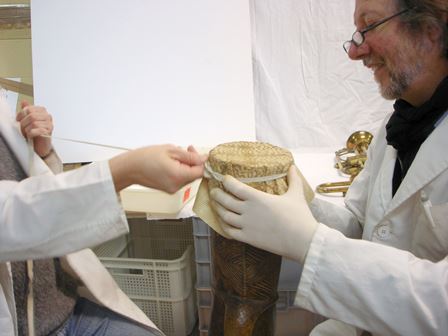