A sound recording from 1350? We must imagine the desire to invent such a device

by Jaume Ayats, director of the Museu de la Música

I have mentioned in several writings that music is not an object, but an action, a social and physical fact at the same time that it is produced, it fades away: it melts and disappears in the very act of doing so. Thus, the musical act is equivalent to the gesture, to the spoken word, to the act of dancing and to the acts of verbal enunciation (theatre, speech, preaching).

I begin here in order to make people understand the long process of transformation that we have been applying to this communicative activity over the centuries, until we come to imagine a piece of music as if it were an object. And until we treat it as an object and, thus, invent mechanisms to preserve it, fix it, keep it, buy it and sell it. It is a process of reification, that is to say, that transforms an idea, a quality or an act into a thing; that conceives it by making an analogy to how we relate to physical objects.

The graphic metaphor -the writing- of sound (of 'music' already expressed in the singular) was a first stage: it emerged in times when the dominance of the act of sound was to be linked to power and fixation, as was the invention of pneumatic notation in the Carolingian era, and the subsequent notations from the Church’s centres of power. Another stage is during the feudal power, with the writing of songs by the troubadours. But the real sounds, the physical ones, were still carried away by the wind. Writing only served as a symbol and reference for those who already had the social (and physical) experience of sound inside their heads and bodies. Scores and the printing press strengthened, thus, the figure of the composer, the creator, could sell the graphic design of the evanescent sound (and whom suffers from those who copy him and spare him the profits).

In other words, little by little the idea of the sound object is being established and the concepts it has produced: of the work, of the composer, of the performance, of the accumulation of goods, of sales and profits, of treasure... on a path that runs completely parallel to the unfolding of capitalism.

However, the desire to preserve the exact sound experience of what we have heard (without the need for the mediation of graphics and reinterpretation) could only be produced through mechanical devices that produced exactly the same sound. Music boxes and little else existed before modern recording, which was already a product of the second half of the 19th century.

For years I have argued that there are no socially isolated inventions. You have to imagine what you want to achieve because, with ingenuity and by applying techniques, when the opportunity arises, inventions can be reproduced. This has happened with the human desire to fly, to go to the moon, or to communicate with someone from a distance. Inventions do not just appear; and they are never the result of a single inspired 'genius', but are always the result of a social environment of desires, of a shared atmosphere. In this way it is easier to understand why they often appear simultaneously - or almost - in different places on the planet or in a cultural area.

The confinement has led me to reread Il decamerone de Giovanni Boccaccio to find -in the tenth novel of the sixth day- a surprising fact in terms of sound recordings. Boccaccio ventures out to satirize the friars who go around the world teaching unimaginable relics, in a very prolific fashion of those years. And look where, among a feather of the Archangel Gabriel, a cherub's nail, a finger of the Holy Spirit, a bottle with the sweat of St. Michael when he fought the devil and the coals with which St. Lawrence was roasted, the following appears: "e in una ampolletta alquanto del suono delle campane del tempio di Salomone". In other words, "and in a small bottle the sound of the bells of Solomon's temple". You have understood it well: the desire to preserve a sound was so powerful, in the same way that they would have wished to fly through the air (which they attributed to the magical powers of necromancy), they imagined preserving the sound inside a little bottle. Just how a smell would be preserved. And not just any sound, but a sound that would have been produced 2,300 years ago. Surely by just opening the bottle the sound would be lost in the air forever... 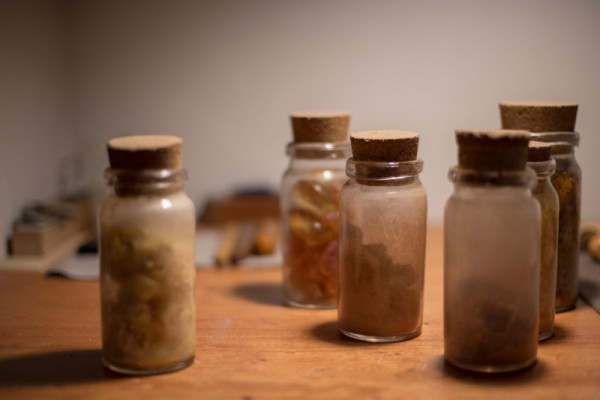 Beyond the humorous anecdote - and the great discovery of the image by Bocaccio - the text of the Florentine humanist is a precious document of a social attitude, of an unstoppable desire: to preserve sound in order to listen to it again outside its environment, outside the place and time in which it was created, where the human communicative action was made. It is a perfect metaphor of recording understood as a 'miniaturization of sound' that occurs in a real situation and the possibility of being transferred in space-time (as Jacques Cheyronnaud described so well in his teaching some thirty years ago). Boccaccio satirized, 670 years ago, the human desire to fix and transmit sound. To make then a recording that could help the weak memory. Now, not just any sound was to be preserved. It had to be a valuable sound, one chosen to be exceptional. A sound relic, a very special treasure.