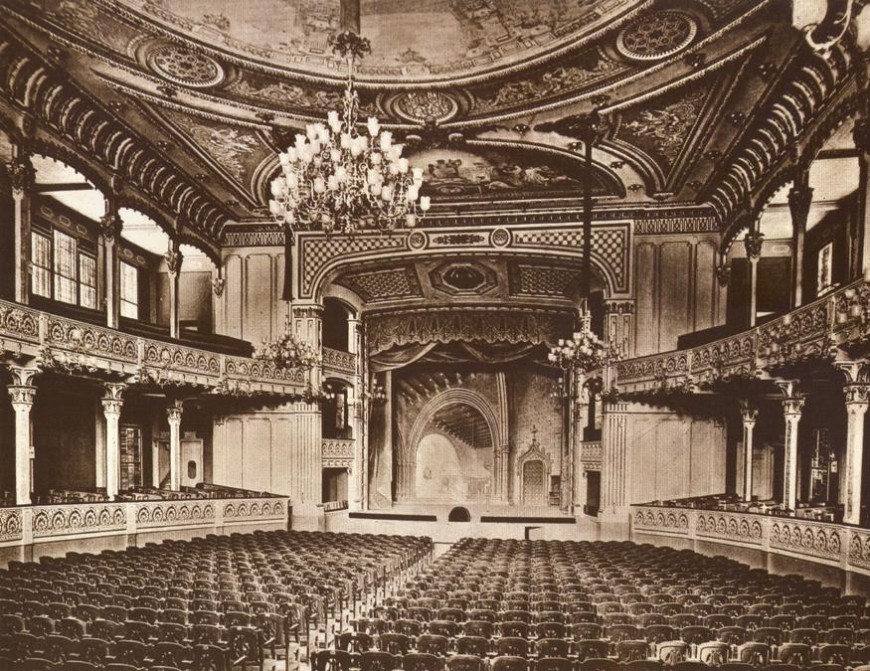 In 1900, Enric Granados founded the Societat de Concerts Clàssics (Classical Concert Society) to promote chamber music and symphony music in Barcelona. The composer wanted to set up an instrumental group with musicians paid a regular wage so as to encourage rehearsals as a way of studying and understanding the works performed. Fugue à 5 was first performed at the society’s public presentation on 15 May 1900 at the Teatre Líric, the former Sala Beethoven located in Carrer Mallorca on the corner of Carrer de Pau Claris.

There were three parts to the concert: for the first they played Edvard Grieg’s Holberg Suite Op. 40 (1884) and for the third, Johann Sebastian Bach’s Harpsichord Concerto no. 1 in D minor BWV 1052. Between these two major works, each lasting about 20 minutes, the second part gathered a miscellany of pieces – two works for piano solo, Frédéric Chopin’s Impromptu No. 3 (1843) and Ignacy Jan Paderewski’s Legend in A flat major Op. 1, performed by Joaquim Malats, and three orchestral movements by different composers, an andante by Cramer, a fugue by Bach and a minuet by Händel.

A few days later, Joaquim Pena published a review of the event. Without leaving aside the thoroughness and the documented arguments that were usual in his reviews, and despite certain misgivings about the name of the association, the musicologist expressed support for the project: ‘we must do justice to Granados and acknowledge that he has tried to do serious Art, that all the works were well rehearsed and that the group was well rounded, with the orchestra faithfully following instructions from his baton’. He also made it clear that ‘the culminating part of the programme consisted of two works by the great Bach, the master of all masters: a Fugue for orchestra being performed for the first time, as absolutely beautiful as so many others by this composer, and the magnificent Concerto in D minor arranged for piano and string orchestra, which we already knew’ (Joventut, 24 March 1900, p. 237). Marc Jesús Bertan also applauded Granados’s conducting and underlined the enthusiasm of the public who, according to his account, had turned out en masse for the event (La Vanguardia, 17 May 1900, p. 6).

The score of Fugue à 5 – written in French in the original – is kept in the Granados collection at the Museu de la Música de Barcelona. The voices can be found in the collection of the same name in the Biblioteca de Catalunya. The line-up is unusual – flute, oboe, clarinet, two bassoons, trumpet, French horn and string quintet. From the surviving scores, it seems that there was an orchestra with seven wind instruments and 23 string instruments. There are no accounts documenting a second performance until its retrieval for the concert Bach simfònic the weekend of 28 to 30 April 2017 as part of the OBC season at the Auditori de Barcelona.