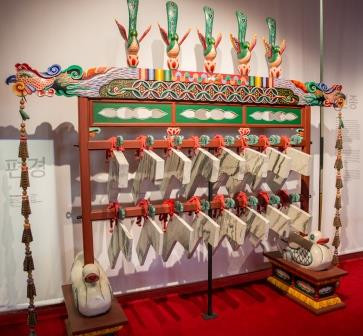 Even the rocks will cry out

Musical instruments are defined as those devices designed to resonate intentionally, either by blowing air through them, striking them or by strumming or running a bow across them. Stones are hard, solid materials and it doesn’t seem like they’d resonate much. In the Stone Age though, humanity developed them to extremely sophisticated ends; they even became cutting-edge technology. So, what would make someone try to use stones as musical instruments? Recent studies have been found that relate music and stones, others speculate that perhaps even Stonehenge may have been a giant centre of stone musical instruments.

Examples can be found of “musical stones”, understood as sound objects, from thousands of years ago in Asia, between Vietnam and China. They were developed as sets of “tuned” stones and were often found near cave paintings. We’ve seen some examples, like “Eolssigu! The sounds of Korea”, which exhibited the pyeongyeong, loaned by the Fontana Foundation, or follow this link to see a woman playing a lithophone in Da Lat, in Vietnam. Many large, hewn, stone instruments hung from the ceiling can also be found in Hanoi, Vietnam. They make a sound when struck. 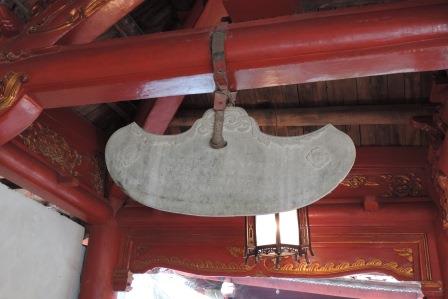 Instruments such as the xylophone weren’t seen in Britain until the mid-nineteenth century, but in 1785, Peter Crosthwaite, the founder of the first public museum in the Lake District, created a similar instrument with pieces of stone found in the Greta River, in Skiddaw (Ruskin Rocks). He was most certainly influenced by those he had seen when traveling to Asia, which would later be known as lithophones (lithos = rock, phono = sound).

Forty years later, Joseph Richardson worked on a larger version. It took him thirteen years to construct it and then he embarked on a European tour. Others, such as the Abraham Brothers or William Till, wanted to copy the invention built of Skiddaw stones that Richardson used in his concerts. It was known as the Rock Harmonicon (ca. 1880) (stone xylophone) and can now be found in the Metropolitan Museum of Fine Art in New York.

In Cuba, the sonores struck two river stones together and there were also “singing stones” in Mexico. In Togo, the Kabiye people make music using rocks as percussion instruments, or the Chokwe of Angola ring bells made of stone called sango, and the Basque people play the txalaparta and so it goes around the world.

In Menorca, at the end of the 19th century, Antoni Roca Várez conceived of and built a lithophone, by working and cutting stones: “As he strolled about his land, he noticed that when he struck flat stones of different sizes and thicknesses with a cane they produced different sounds; thus, he came up with the idea of arranging a set of stones to put together a complete musical scale” (translated from the original Viquipèdia article).

In the international catalogue of musical instruments, MIMO, there are only 15 instruments under the category of lithophone. Included are castanets, which may have originally been made of stone, like the crusmata, or those used by children, called tarreñas, which are more rustic, or those the Basques use (called arxaluak). One sound producing stone is even used to mark the boundaries of a sanctuary; it’s the Roca de la Salve d’Encamp that marks the limits of the Sanctuary of Meritxell in Andorra.

We haven’t got any of these instruments at the Museum of Music, but we do have a jade stone flute from the collection loaned by Quico Pi de la Serra. Claude Laurent’s glass flutes also contain precious stones, specifically, rubies. We also have “stone” disks, that are called that because one of their components is slate. Despite their name, the rigidity of the material means they’re easily broken.

If you want to see something interesting, take a look at this organ. Its pipes, keyboard and part of its mechanism are made of stone (marble to be exact). Check out these two more contemporary examples, a lithophone ensemble, The Reverse Sessions, and the composition “Masturbatory stone” by Alfonso Pretelt, where the stone isn’t  struck, but rather it’s rubbed which totally amplifies the sound.

Or you may want to see a process tangential to the subject we are discussing: the musical iconography of the Pórtico de la Gloria, made of stone, which was used to recreate wooden instruments, “De la piedra a la madera”. Follow this link to see “Singing stones” in Mexico. This video by Pathé shows what a stone xylophone sounds like.