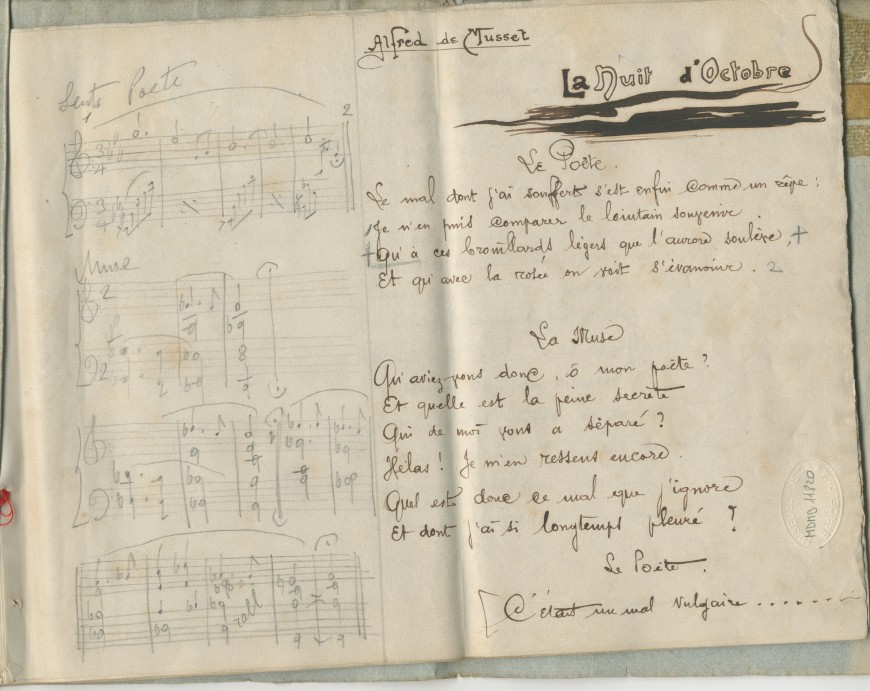 Barcelona, 1904. The artistic and intellectual circles of the city boil with musical sessions, poetic readings and lyric theater. Enric Granados, the great pianist, founder of the Academy wearing his name, passionate about romantic poetry and Edvard Grieg, organizes musician-literary sessions with theater, music and poetry readings. On the evening of June 6th, Granados was accompanied by Josep Maria Roviralta, who gave a lecture on the relationship between poetry and music, and his close friend and accomplice Adrià Gual, well-know author and theater director. Gual presents his own creation, L’última primavera, inspired by Grieg's homonymous work. The actors of the Teatre Íntim move freely with the music, while Granados conducts a string orchestra playing Grieg’s music. Finally, a magical moment, ephemeral and unrepeatable: the declamation of La nuit d’octobre by Alfred de Musset by Pierre Mottmeyer and Marie Monros, with improvisations on the piano by Granados himself.

Alfred de Musset was a must for modernist artists and intellectuals in Barcelona in the beginning of the 20th century. La nuit d’octobre is part of a four-poem cycle written between 1835 and 1837, after a bitter break-up with the writer George Sand. These four nuits (mai, décembre, août and octobre), written in the form of a dialogue between Poète and Muse, form a passionate and painful chronicle of the poet's amorous and artistic tribulations, “poet” meaning author and main character at the same time. The translation of La nuit de octobre that we present in the concert was published by Alfons Maseras in 1922. This translation was represented at the season opening of the Catalan School of Dramatic Art in 1922, and Adrià Gual personally chose it for the resumption of Teatre Íntim in the Sala Myria, in 1924.

There is no evidence that Granados repeated the experience of accompanying poetry after that evening in 1904. From that summer night only one trace remained: a manuscript containing the copy of the poem to the right, and to the left indications and handwritten musical motifs, clearly identifiable as annotations by Granados. This jewel is part of the Historical Archive of the Museu de la Música thanks to the donation from Granados family, and is the seed that allows us to relive that night with Sergi Belbel’s voice and Albert Guinovart’s piano. The manuscript shows how Granados, a skillful improviser, prepared the show: on the first page he wrote two themes that correspond to Poète and Muse, the first being a fragment of the Romantic Scenes that he published in 1904. Indications are progressively shorter and the musical fragments alternate with suggestive written statements: "berceuse", "poet and rossiñol", "somber theme", to end with "theme of sun and light."

In order to frame La nuit d’octobre and place ourselves into Granados’pianistic universe, Guinovart offers the virtuosity and brilliance of the Allegro de concierto (1903), winner of a competition specifically for concert allegri organized by the Royal Conservatory of Madrid, and the deep lament of La maja y el ruiseñor, from the Goyescas suite (1911), a song of love and despair with the symbolic role of the nightingale as an emblem of romantic love. Finally, a contemporary hommage to the memory of Granados: Albert Guinovart's Valsos poètics (2011), with the same structure as the Valses poéticos by Granados (introduction, six character waltzes and final), a work that celebrates the musician, artist, painter, reader, creator, a polyhedral and exciting character.