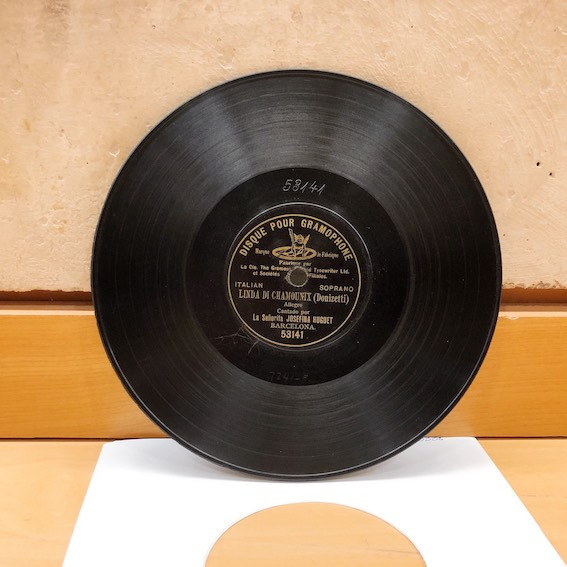 by Jordi Domènech, composer and contertenor

The Museu de la Música de Barcelona has proposed to me to comment on two sound recordings by Josefina Huguet. First of all, let's place the singer. Josefina Huguet was born in Barcelona on September 21, 1871, with parents from Urgell and settled in Barcelona. He began his singing studies with the teacher Bonet and, in 1888, at the age of 17, he made his debut at the Liceu with small roles in La africana, El barbero de Sevilla and La favorita, and with Micaëla, in the opera Carmen. The fame grew and was recognized internationally, coming to sing from the Teatro alla Scala in Milan to New York. She was the first Catalan soprano to record an opera album in 1903. In Buenos Aires they spoke of the "Huguet throat" as a privileged voice and a phenomenon in the world of singing.

These two recordings are:

In these two recordings you can listen to a fragment of Linda di Chamounix by Gaetano Donizetti (1797-1848), an opera premiered in Vienna in 1842 and presented in the first season of the Gran Teatre del Liceu, in 1847. The cavatina "O luce di quest’anima" has always been much appreciated by sopranos because it has a character and structure that allows the artist to exhibit her vocal resources, adding ornaments and variations. A cavatina is a type of aria that used to go at the beginning of the opera, serving as a presentation of the singer, and built with a binary structure, that is, it used to have two stanzas although, sometimes, the text was the same. In this case, the stanzas are made up of two fairly similar sentences: A and A ’(the second differs only slightly from the first). In addition, Donizetti adds a very bright final coda, to finish rounding the piece. Therefore, its general structure is: AA '- AA' - coda. So much repetition demanded, of course, the best of divas, not only as singers but as musicians, as they were expected to enrich each new A with a thousand and one watermarks.

Given the duration limitations of recordings from this time, “Sra. Huguet” (Mrs. Huguet) cannot sing the complete aria, so she makes two incomplete versions, without giving up, but, to embellish, more and more, the main phrase. In the album version of The Gramophone he sings a whole stanza and the coda (AA '+ coda) while in the wax cylinder version he sings the two stanzas, the beginning of the coda and a short cadenza (AA' - A '' A '' '+ cadenza), delivering the cavatina in a very showy way. ¿What is a cadenza? It is a brilliant fragment, usually short and unaccompanied that often coincides with the end of a section.

If you listen to the two versions one after the other, you will appreciate the ability to recreate the same phrase in different ways with ornamentation and curves that allow you to understand the great creative capacity and the surprising vocal ability of one of the divas who triumphed just in the last decade of the 19th century and the first of the 20th century. She recorded only between 1903 and 1910, the year she retired from acting. These recordings then allow us to appreciate first-hand the style of the 19th century belcanto.