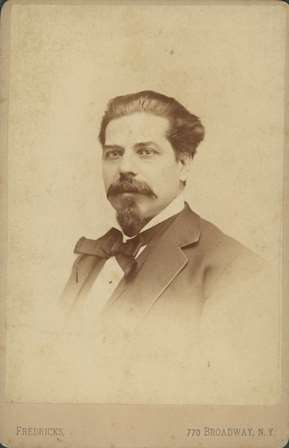 The Historical Archive of the Museu de la Musica is full of portraits with handwritten dedications. These images, often of high quality and made in photographic studios, reflect the friendship, professional relationship or artistic admiration between the person portrayed in the photograph and the person to whom it is dedicated. In some cases these people and relationships are well known and studied - we have Enrique Granados and Apel·les Mestres, or Joaquim Malats and Isaac Albéniz- while others contain quite a few misteries. This is the case of the photograph with the number 05.1911 of the Isaac Albéniz collection. It is a portrait of a man, taken at the Fredrick Photographic Studios at 770 Broadway, New York, with a dedication written on the back:

(Here you have oh great pianist! The humble token of appreciation from your sincere friend Quintin Garreta)

The double date seems to indicate that the photo was taken in November 1880, while the dedication was written on March 18, 1881. The character in the photograph and author of the dedication is clearly identifiable: Quintín Garreta. However, beyond this image and this brief text, there is no other reference to Garreta in the entire archive, nor in the fonds of the Biblioteca de Catalunya or the Centre de Documentació de l'Orfeó Català. He is briefly mentioned in Walter Aaron Clark's biography Albeniz, Portrait of a Romantic: according to Clark, this photo could lead us to suppose that Albéniz traveled to New York after passing through Cuba, where he gave concerts in February 1881. However, the New York Times archives contain no reference to concerts by the pianist from Camprodon in the city, and to this day there is no evidence of Albéniz's visit to New York.

The challenge was, then, to discover who Quintín Garreta was and what relationship he had with Albéniz. Thanks to digital archives of historical press, as well as personal and family records from Catalonia, Spain and the United States, we have pursued Garreta's trail from one side of the Atlantic to the other, with some interesting results and, evidently, many enigmas still to be solved.

Quintín Garreta was born in Valencia between 1835 and 1841. We have not located his birth certificate, but we did find several passenger lists arriving to the United States by ship, which indicate the age, origin and occupation of the passengers, although with some inconsistencies among them. Garreta's first documented arrival to the New World took place in 1875 aboard the SS Helvetia from Liverpool, at -according to this document- 35 years of age.

We see how he is assigned the occupation 'Gent', short for 'gentleman', that is, he had unknown occupation at that time. However, in the 1914 passenger list he appears as 'Merchant', coming from Valencia, Spain. Indeed, since his first trip to New York he was engaged in the real estate business, as shown by various records of land purchases and sales in New York.

The documents indicate that he often traveled from one side of the Atlantic to the other. We find him entering New York in 1880, 1892 and 1914, according to the passenger lists. The New York Herald, a newspaper published in Paris in English for the American public residing in France, mentions him on February 9, 1893 as an 'American Visitor' staying at the Hôtel des Ambassadeurs. In 1880 he is staying in Havana -then still a Spanish colony- as a representative of the newspaper Las Novedades, according to the newspaper Revista económica in connection with a political controversy surrounding the military man and writer Adolfo Llanos. It was in Cuba, quite possibly, where he met Isaac Albéniz.

He also acted as a representative, witness or grantor for different types of professionals. According to the press, he personally presented to King Alphonse XII an invention by a certain 'Mr. Bosch' or 'Mr. Besk', which would provide wooden ships with the same resistance and solidity as armored ones, as explained in the review of the newspaper Crónica meridional published on September 11, 1875. Garreta presented the invention to the monarch, who asked him about the Philadelphia World Fair that was planned to be held the following year. The same story was published in El Globo on September 9.

The most remarkable example of this role of procurer is a document attached to Patent US383050 published by the United States Patent Office, in which we find Garreta's name and signature as testimony.

This is the patent application for the so-called 'volta catalana' by the architect Rafael Guastavino (1842-1908), of Valencian origin and one of the most famous architects in the turn of the century. Trained in Barcelona, Guastavino was the author of iconic buildings such as the Boston Public Library, Grand Central Station in New York, Mount Sinai Hospital and the Cathedral of St. John the Divine. He was also a successful entrepreneur with the Phoenix Building Company and the Tile Fireproof Building Company and, above all, inventor of advanced construction systems that made possible the construction of great works such as the New York subway. Rafael Guastavino's contribution to Catalan architecture is also remarkable, and today we can visit one of his most important industrial buildings: the Asland cement factory founded in 1901 by Eusebi Güell and located in the Clot del Moro area, between La Pobla de Lillet and Castellar de n'Hug, in Berguedà. The factory was active until 1975 and currently houses the Museu del Ciment, attached to the Museu Nacional de la Ciència i la Tècnica de Catalunya.

Garreta's participation in the Spanish press was regular, especially regarding Spanish and American political issues. In November 1892 he sent a letter to the Barcelona newspaper La Vanguardia to explain details and opinions about the United States presidential election , which had been held on the 8th and won by the Democratic Party. Garreta's liberal and anticlerical political affiliation is very clear in these articles. On September 22, 1910, he published an open letter in the Madrid weekly El Motín, directed by José Nakens, in which he expressed the absolute support of himself and a group of Spaniards living in New York for the President of the Spanish Government, José Canalejas, in the political actions initiated to separate Church and State. He enclosed the exact copy of the letter that he had previously send to Canalejas himself on August 31, in which Garreta congratulated the prime minister for a speech he had given the previous July and also for rejecting the pressures by the Vatican and the ecclesiastical establishment in favor of a political program that, literally, '[...] universally fills the eyes of free and civilized peoples'. The letter is signed by Garreta himself (with the address 2 Stone Street in New York) and a group of Spanish citizens -men and women- living in New York.'

In addition to business and politics, Quintín Garreta still had time to participate actively in cultural enterprises such as the Societat Coral Catalana, a Claverian-rooted entity created by a group of Catalans in the image and likeness of the choral societies that proliferated in Catalonia. ’Aviat apendrán los yanquis á llevarán l'barret al sentir lo nom d'En Clavé’, stated La Llumanera de Nova York in the formal announcement of the creation of this society. The president was Artur Cuyàs -also director of La Llumanera- and the musical director, Mateu Sabater. Quintín Garreta is mentioned as a full member of the entity in this same journalistic review.

With this small investigation we have not been able to find out anything more about the relationship between Isaac Albéniz and Quintín Garreta, nor if the Catalan musician visited the United States, nor if Garreta also acted as his procurer. But we have discovered a few curious and interesting details about a man who was nothing more than a face in a photograph , but has emerged instead as an influential and well-connected character in New York, which, even then, was the city that never sleeps.