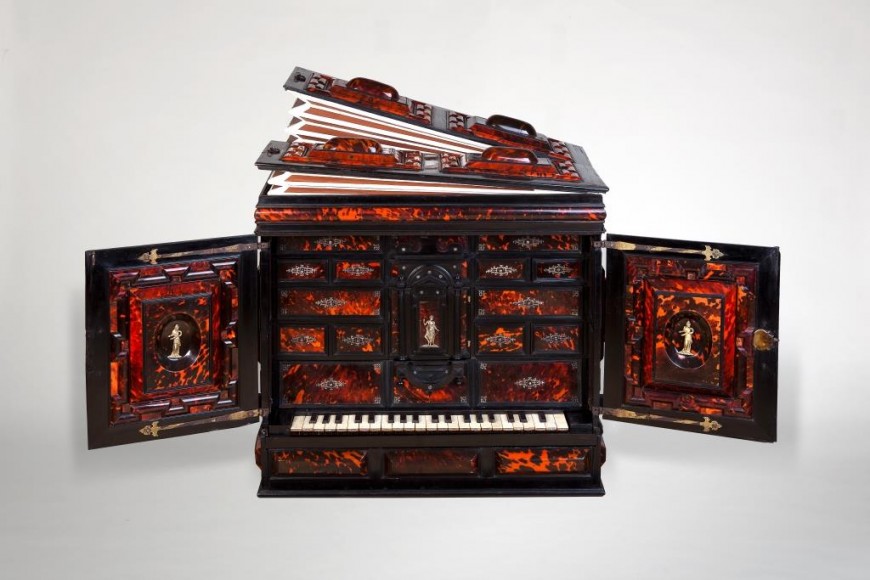 by Pep Gorgori, journalist and musicologist

Having finished the recording, the claviorgan was returned to its place in the Museu de la Música’s keyboards room. Since then I’ve been back a few times, with visitors, with friends, alone, to listen to some of the concerts held at the museum... And I look at it differently. The organist Óscar Laguna says it hasn’t got a single screw apart from the ones that hold the keyboard in place. It was cut with marvellous precision, at a time when the only precision instruments were a handsaw and one’s own hands. With that and a whole lot of different types of wood, painstakingly cut and fitted together, the instrument has survived no less than four centuries. I therefore declare myself an admirer of the claviorgan and its creator, Lorenz Hauslaib, thanks to whom we now can travel four centuries back in sound.

After we’d done the recording, we started work on the design. We wanted something original that would reflect the marvel of engineering and modernity the Hauslaib was in its day. Two students on the Elisava Master in Packaging course, Laura de Miguel and Alejandra Jiménez, came up with the idea, which, once ripened, you can now see (and, above all, touch).

The organist Montserrat Torrent, now in her nineties, agreed to write a few beautiful notes to accompany the CD and remind us that our efforts were preceded by a marvellous, hard-working generation and that our passion for Cabezón wouldn’t exist if it weren’t for their work.

At the same time, of course, there was all the post-production and the campaign to present the CD, which culminates with the concert at the Auditori, one of those concerts that can only be seen in Barcelona because travelling with the claviorgan isn’t easy. This CD will be distributed via Juan de la Rubia’s website and at the Museu de la Música, as well as via Amazon, Spotify, iTunes... We want Cabezón’s music and the sound of the claviorgan to be heard all over the world, simply because both the composer and the instrument deserve it.

This is the story of how I spent three days of my life living with the Hauslaib claviorgan and Cabezón’s music. Before finishing, though, I feel the irresistible need to give my most effusive thanks to the staff at the Auditori and the Museu de la Música for their willingness to help. They looked on the project from the first moment as something of their own and, despite the complexity of working with an instrument that is four centuries old, they were able to find brilliant solutions for every possible obstacle. Jaume Ayats, Marisa Ruiz, Manel Barcons, Clara Sen, Sara Guasteví, Esther Fernández, Joaquim Garrigosa, Robert Brufau and Verònica Rodríguez have been just as important as Cabezón and Hauslaib in making the idea that came to us one day in November halfway between Murcia and Cuenca come true.

Reliving Cabezón, part one. Before