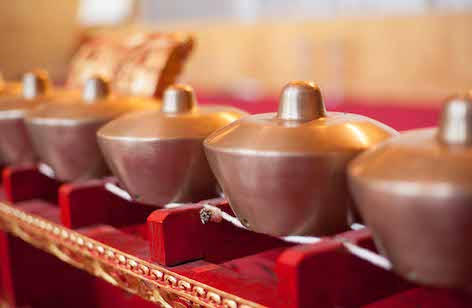 The larger the orchestration of a work, the more easily we will find gongs in it. Suspended gongs, subject to a structure, are classified into three large groups: suspended gongs, which are the ones that we will almost always see in Western classical music and that we do not, we will call gong, but tam-tam; nipple gongs; and bowl gongs. History places their origin in China, towards the 4th century BC, they are usually made of bronze and have been used both in death rituals, as in war or to emit signals.

We find different types of gongs from all over the world and in very diverse musical cultures:

If you want to know this and other information, we recommend you read (and expand and improve if you want), the article Gong in Wikipedia.

And if you want to know the typologies that we keep in the Museum of Music of Barcelona and the particularities of each one, from Vietnam to Africa, from Korea to Europe, click here.