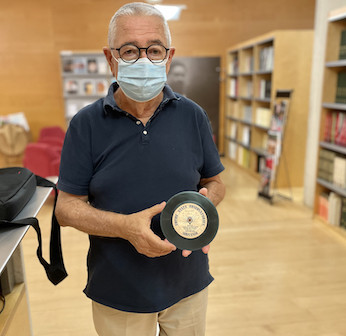 The history of the self-released vinyl postcard

Andreu Suriol Farré, pharmacist, born in Barcelona in 1894, and Dolors Escofet Bonsoms, born in Banyeres del Penedès in 1895, were married in this mentioned town on August 4, 1919. On June 14, 1920 their first child was born, my father Agustí.

Thirty-five years later they decided to undertake a transatlantic journey to New York. This was in August, 1954.

Josep Pla explained what New York was like in those days in his work Week-end (d’estiu) a Nova York, since he coincided on the boat “Motonave Guadalupe” with my grandparents. I should say that between them and Pla there was no relationship: they were neither friends, nor acquaintances, nor greeted. Or that's what I've always thought.

Naturally, they went up to the tallest building in the world at that time: the Empire State Building, where they found a recording and publishing machine for records, with which, by means of one (or some) coins, you could immortalize your voice for a very short run on a small size vinyl record.

The record had passed through my hands many times without being curious enough to listen to it. Lately, while I review my life in order to leave a written family memory, I put it on the player and, oh, surprise: the dialogue between a man and a woman who talk about inconsequential issues, such as the food that had cost them little more than a dollar, the fact that they were there celebrating thirty-five years of marriage, which made me think that those voices were those of my grandparents.

I contacted the Museu de la Música de Barcelona, ​​to whom I have donated the album and with the desire to modulate the playback speed because the voices still seem too high-pitched, despite the good work done digitising it (we have changed the initial 75rpm to a definitive version at 69rpm).

You can listen here.

The short story of an exile

Although the relationship of these events with music is tangential, they illustrate an anecdote from the fateful days in February and March 1939, when lots of people were passing to France due to the unstoppable attack by Franco's troops.

My father Agustí was called up at the age of eighteen, and was a member of the so-called "Lleva del biberó". I think he was in a company of Intendance and he went back to La Seu d'Urgell, where he served in the kitchen.

Despite the silence of many people who suffered that uncivil war, I had caught something from his experiences. Like the rest of his colleagues, he crossed the border (in particular, he did it in an ambulance) and they were searched there. He said that he was carrying two suitcases, one with condensed milk and the other with… vinyl records! What a strange thing, and for me, very difficult to explain.

The disks were seized from him, and we no longer know anything else about them. Instead, jars of condensed milk were very useful to him —when he returned to Spain, where he was interned in the Santoña concentration camp— to revive another malnourished Arbocean that he encountered. That could not have happened if he had kept the suitcase with the records.

Being a bit tenebrous, if instead of the life-giving condensed milk, he had given his friend a record, it could not be other than Mozart's Requiem.