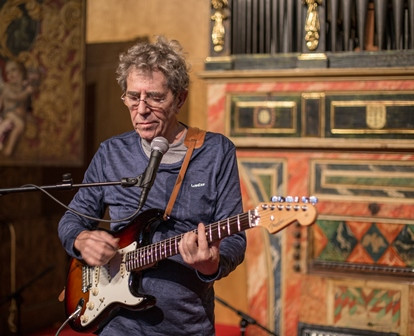 The Man with the Guitar

by Jordi Novell Demestres, Head of Projects of Grup Enderrock

Francesc – or Quico – (Barcelona, 1942) sees himself as a craftsman who writes songs; a singer-songwriter by trade. He is the eldest of the Setze Jutges group still working, and the youngest apprentice touched by the blues and magic of Big Bill Broonzy. Greatly influenced by Brassens’ way of saying things, at his 75 years of age, Pi de la Serra can lay claim to a relatively short but effective repertoire of songs whose names are enough to conjure images that, once heard, will never leave you. L’home del carrer, Verda, Cançó de l’atzar, Si els fills de puta volessin no veuríem mai el sol, Passejant per Barcelona, Fills de Buda and Suau, among many others, are part of our history and of the history of a country that has often been unfair with its creators.

However, Quico has always had his friends at his side: friends from Catalonia (such as Bonet, Serrat and the much missed Ovidi), further afield in Spain (such as Sabina, Aute and Ana Belén) and beyond the borders (such as Paolo Conte, Gilberto Gil and Caetano Veloso). They are all colleagues who have shared with him the art of loving: of loving music, their trade and their tool: the guitar.

He was captivated at a young age by the triads of rock music with his group Els 4 Gats, which performed anthems and ye-yé sixties dance music such as “Cla i cat”. In parallel and under the shelter of the Jutges, Pi de la Serra found himself accompanying Miquel Porter and writing his first songs that vaguely resembled snide chansons. The shadow of Georges Brassens in his rhymes soon started to shine through the light of blues. He has never left him since the moment he discovered him at Barcelona’s Jamboree club. And that’s how he has been infecting people with his passion on a weekly basis – for twenty-five years! – through his programme T’agrada el blues? which is broadcast on Catalunya Ràdio.

Irreverent by definition, Quico’s songs and humour – both good and bad – act as an antidote to boredom, built on a very simple scale of values. Almost the entire body of work of this musician from Barcelona stands on four pillars: justice, freedom, equality and respect.

Last 16 December was performing with his two partners in crime – Amadeu Casas on guitar and Joan Pau Cumellas on harmonica – presenting the songs from his two latest albums: “Quicolabora” (Temps Record, 2011) and “Dues tasses” (Temps Record, 2015). The three of them conspired with a blues strategy in eight-bar phrases to produce a very special concert. Hey Quico Hey!