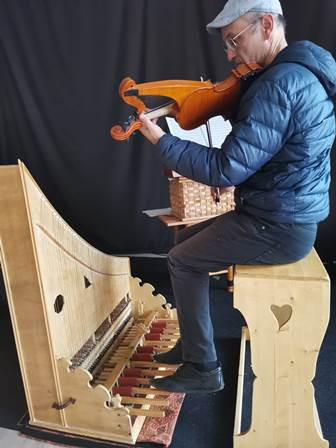 The pandemic and the loneliness of the musician

by Oriol Rossinyol, ex-head of Collections of Museum of Music of Barcelona

We have been confined to our homes to fight this tiny enemy who denies us contact with our loved ones, who distances us, corners us and isolates us until we break our social bonds. It is hard.

We have all spent long days of solitude, perhaps total, or shared with our partner or family. We have had time to think, to laugh, to cry, to imagine, to sing and to fill our hours with music. And we needed to share, that's why we have put imagination and we have transformed loneliness into communication.

Do you remember when, through the nets, or perhaps live, you heard how an instrument or a voice sounded from a balcony? And when a new instrument was added that tried, in the distance of the houses, to share the dance of sounds? The silence of the city, the emptiness of the streets, gave way to music. And with the music the emotion. The sounds travel through the air and the music reaches the different ears, certainly not with the desired precision, but with all the strength and feeling necessary to move and draw on our faces a smile that unites sadness, fear and joy of each of the people confined in their homes.

Music is like that, and musicians make music. It was not enough for them to have long hours to study. It was not enough to be able to work on a score down to the smallest detail. They needed this receiver to close the performance. It was necessary to transform the art of sounds into the musical fact. To share.

As you will remember, it didn't stop there. Imagination was put in front of us and technology played its part. Obviously, not all musicians play alone. In spite of the deficiencies in computer knowledge, the networks were filled with duets, groups, choruses and orchestras that, with careful work done individually, managed to offer us magnificent ensemble works. Surely each musician missed that complicit look of the partner, that precise and discreet gesture or that particular expression that transform a sum of voices or instruments into a collective and compact, unique fact. But the need for communication and the desire to share were unrestrained.

We could even hear wonders that, if we did not know that technology was with us, we would think that supernatural phenomena were running through the networks. I mean that some musicians cloned themselves and thus made works for different instruments played by one player.

In fact, it is not a novelty that a musician does not have enough to play only one instrument and needs a musical partner. And this one is not always available. A look back can show us that often a performer has sought to accompany himself with a rhythmic instrument. It is very common for example a flute and a drum played by the same person. Just look at a cobla playing sardana. But this instrumental binomial is neither exclusive nor unique, since among other places, we can find it in Ibiza, in Mallorca or if we go a little further in the Basque Country.

In fact, many musicians have invented gadgets to accompany themselves with a rhythmic instrument. It is also common for a performer to play different percussions at the same time. We think of the drums as an instrumental ensemble. It is more rare for a single player to play several melodic or polyphonic instruments at the same time. Perhaps we can think of a singer playing the guitar and the harmonica with the help of a support hanging from the neck. But let's look at the story again.

I am thinking of the organ, with its rich sound and complex building, with which the performer can execute different melodies with a diversity of timbres. However, it is still a single instrument.

If we look at the claviorgan we see a clear attempt to combine two instruments into one, an organ and a spinet. In the Music Museum we have a magnificent example (MDMB 821) by the 16th century Nuremberg builder Laurentius Hauslaib. It is in perfect condition after a long and meticulous process of research and restoration.

As perhaps we all know, in the Romantic period the piano was the king in the instrumental field. What will surprise someone is that the imagination of its builders did not only work on the mechanisms, forms and sound. Different pedals helped the pianist to modify the timbre of the notes. But it seems that they did not have enough and added more pedals to drive drums and tambourines. You can already imagine a pianist of the 19th century European nobility playing the piano and the percussion at the same time. It was the fashion of the moment, music alla turca, which influenced many composers, a consequence of the presence in Europe of military bands of the Ottoman Empire. In the Museum we will find different pianos that have pedals that drive the percussion. We can look at the magnificent grand piano of the builder Thyjm of Vienna (MDMB 425). It has 7 pedals and in the exuberant decoration of the furniture we can see some human figures carved on the top of the legs, no doubt remembering the Turkish musicians.

Also at the same time many mechanical instruments were built that incorporated different musical tools in the same piece of furniture. In this case it was no longer that a performer played several instruments, now they even eliminated the performer and replaced it with a predetermined program on a perforated tape or a roller and all that was needed was to turn a crank. But this is not today's topic, we are talking about the musician who is alone, so let's leave it for another day.

It would indeed be our character the musician we could generically name as a one-man-orchestra. Many performers have invented mechanisms of levers and handles which, when coupled to their body, would activate different sound objects. The street has been the main field of action for these musicians, who have often livened up village festivals. Although now we can find that they follow this tradition. It is worth mentioning a set of 60 instruments coupled to be played by a single musician on top of a tricycle, which is preserved in the Museum. I am referring to the orchestral Tricimelotocus, built and used by the musician and actor Eugeni Solé in the 80s.

​ And finally, let's think again about the Covid-19, since it has not left us yet and we must keep it in mind.

One of the places where the beginning of the pandemic in Catalonia did a lot of damage is in Igualada. And that's why we want to talk about a musician from this city. Pep Massana breathes and perspires music everywhere. And, despite being a great violinist and sharing music with different musicians and groups, he often needs another instrument, even if he is alone. It is not only the loneliness of the musician, the lack of the complicit gaze or the smile of shared emotion. He needs to fill the lonely notes of his violin with harmony. He has always looked for ways and now, with confinement, he has been able to realize a project to be able to play another instrument at the same time as the violin.

Most instruments are played with the hands and also with the mouth. In fact the feet are not forbidden and have their importance, for example on the drums, on the harp pedals or on the piano. Normally when we listen to an organ we do not see the musician, but if we see an organist playing a cathedral organ we will notice that apart from playing two or three keyboards with his hands, he uses his feet to play some pedals corresponding to the lowest notes.

When I was at home, in seclusion to protect myself from the pandemic, I received a video of Pep building an instrument. It's a claviciterium, he told me, it's like a harpsichord that you play with your feet. Now his hands caress the violin that draws melodies while his feet move marking the path of harmony that accompanies them.

The confinement of Igualada, despite all the evil it has done, has shown us the strength, the will, the cooperation to fight against the Covid-19 and also to see and hear a violinist who moves his feet and amazes us with his imagination and his music.