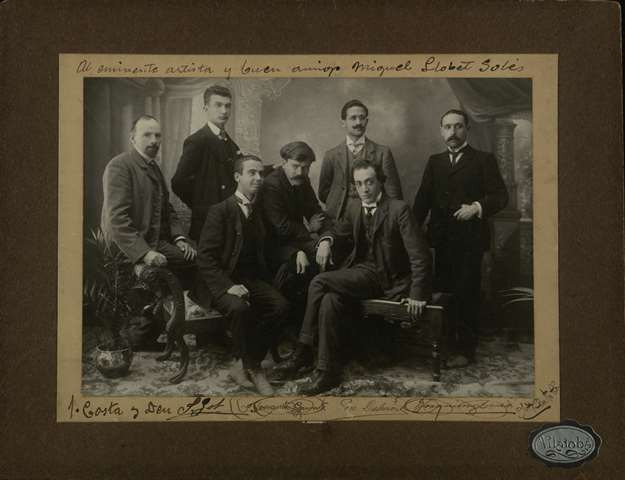 We are surrounded by scoundrels... and Llobet is one of them!

When the Colla de Sabadell began to make its own with a loaf of bread spiked on an umbrella, Miquel Llobet i Solés (1878-1938) was already a consecrated guitarist and doubled the age of that group of terrible enfants led by Joan Oliver, Francesc Trabal and Armand Obiols. The absurd humour and avant-garde ambition of the Colla placed "the Catalan Manchester" at the centre of the country's artistic life, and Llobet also participated in this cultural adventure of which this year celebrates the centenary.

Llobet's relationship with Sabadell came from afar: he was a regular at the concerts and musical sessions of the Centre Musical Fernando Gausente, which functioned as a music school, shop and musical café with concerts and other activities. Various documents from the Llobet collection at the Museu de la Música testify to this relationship, such as this photograph dedicated by Gausente and other personalities to the Barcelona guitarist.

Another interesting document that bears witness to this close relationship is the album of dedications that Llobet received in 1904 and which can be found in the Museu de la Música. This book contains drawings and dedications by Fernando Gausente, Domingo Prat, Josep Vilatobà and other musicians and artists of the time.

Music was part of the concerns of the members of the Colla de Sabadell, especially from the famous conference La música i les ciutats solitàries, which Francesc Trabal gave in December 1920 at the Acadèmia de Belles Arts. A few months later the members of the Colla founded the Associació de Música de Sabadell, which would have almost 600 members and a stable season of concerts in the Teatre Principal with internationally renowned artists. Miquel Llobet performed in Sabadell on 26 January 1923, at the height of the effervescence of the Colla's activities, with a repertoire that included original works for guitar by Ferran Sor, Napoleon Coste and Francesc Tàrrega, as well as transcriptions of works by Granados, Albéniz and Falla.

At the beginning of the 1920s, the Music Association of Sabadell joined the Lliga Nacional d'Associacions de Música (National League of Music Associations), which brought together eighteen associations of this type located in small and medium-sized cities in Catalonia. This allowed them to bring renowned artists as they could be sure of a minimum number of concerts in a few days. For example, we find Miquel Llobet in concert in Vilanova i la Geltrú, Reus, Granollers, Terrassa, Girona, Vic, Lleida, Tortosa or Manresa, always through musical associations.

Llobet's personal documents show us that the repertoire did not vary much from concert to concert:

The legendary harpsichordist Wanda Landowska performed in Sabadell in November 1926 with a programme of baroque and classical composers. Also present were the Lleida pianist Ricard Viñes on 15 May 1928 and the Russian Arthur Rubinstein in 1930.

The Associació's concerts were true events in the city, both for the quality of the interpreters and for the care of the hand programmes, the work of the well-known printer Joan Sallent. This artistic ambition contrasts charmingly with the physical headquarters of the entity from 1926 onwards: an English house - with the courtyard behind it, typically from the Valleys - in Carrer d'en Font, in the centre of the city, and sarcastically called Casino dels Senyors. In reality, it was a den full of junk with which the incorrigibles of the Colla filled the installations such as the 'monument to the thing' or 'the museum of stolen things', as well as the famous dragon with the slogan 'Estem voltats de pocavergonyes' (We are surrounded by scoundrels).

In 1928 the Acadèmia de Belles Arts hosted 'Les nits amb cua', an avant-garde cycle outside the season of the Association. The presence of Ricard Viñes shows the Colla's commitment to musical modernity: music by Erik Satie, Gabriel Fauré, Darius Milhaud and Germaine Tailleferre could be heard, as well as composers labelled as "prior to Beethoven", a way of beginning to imagine the concept of ancient music. Llobet had already dealt with Ricard Viñes since at the beginning of the century, in Paris, they had been related to the group Société des Apaches, an informal group of avant-garde, iconoclastic and antiwagnerian musicians and artists in which Albéniz, Debussy, Ravel, Viñes or Calvocoressi participated. The name Apaches was provocatively adopted from the real scoundrels of the time, much more feared: the Apaches, named after the newspapers of the time, were bands of pillastres, thieves and robbers who became strong in the streets of Belleville, Ménilmontant and other popular districts of Paris.

After scandalising and surprising, writing, speaking and drawing, founding the Institució de les Lletres Catalanes, the Associació de Música, the Amics del Teatre, the Amics de la Poesia, the magazine Paraules, the Edicions La Mirada, participating in a thousand and one initiatives to promote culture and transform society, the Colla de Sabadell dispersed with the Civil War and the subsequent exile. Miquel Llobet died at the beginning of 1938, withdrawn from the stage and depressed by the war disaster. One and the other saw everything they had built crumble. Even so, a century later the legacy of those scoundrels is still alive, and we can get to know it thanks to the documentary legacy and the work of libraries, archives and cultural institutions.