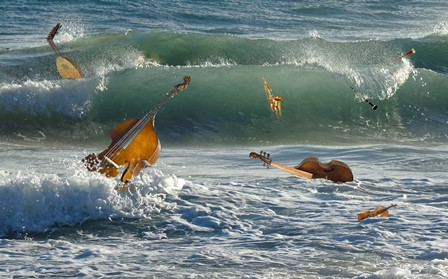 I remember one dusk at the beginning of March 2007, shortly before the opening of the Museum at the Auditori. We had just installed the instruments in the display cabinets. Tired, I sat down in the stands of the classicism space. There was no one left, just complete silence. Before me, the eighteenth-century orchestra rested, now, in its final place, at least for a few years. Behind the instruments the glass cases protected harps, keyboards and wind instruments, and further in the background, even more showcases displayed violas and Baroque lutes.

Since I found out about the Museum’s design, I had often thought about the problems there might be with such overlap of subject matters and transparency. I imagined that it wouldn’t be easy to see a displayed object in detail, since the ones in the rear, the light and the glass would create reflections that would make vision more difficult. In that moment of peace those thoughts faded away and the Museum took on a whole new dimension. I was totally surrounded by instruments, immersed in a sea of reflections where the glass multiplied them to infinity. I could see a piece in detail from the front and the back, but at the same time I was walking through a labyrinth of sound objects where reality and mirrors blended into one. The magic of light had entered the world of music.

A few days later it came time to do the sound tests. One of the things that worried us was the interference of the different types of music between the rooms. Being in a Museum space and hearing different types of music at the same time was not the effect we were looking for. On the contrary, each historical field had to be independent: the objects, the images and the music formed a whole with no link to the next space. It was the visitor who had to decide the moment to move from the Renaissance to the Baroque or from Classicism to nineteenth-century music. Musical interference between the spaces could be considered as an introduction of the next period but thinking that in this context would be an excuse for not having successfully solved the technical problems. In fact, in the twentieth century different composers had experienced simultaneous audition of different music in the same space. Doing so at the Museum of Music, however, did not make sense and we did our utmost to minimize these sound interferences. 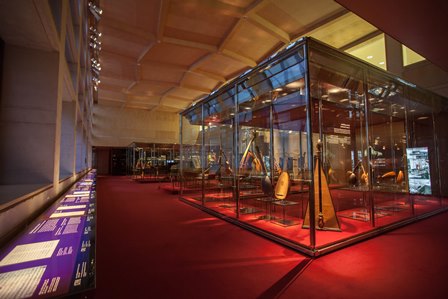 Through the years I've worked in the Museum, I've had many experiences with instruments, music and people. Perhaps one day I’ll explain some of it to you, but now I’d like to talk about the place where these first memories of the Museum took me: light and sound. Specifically, white light and white sound.

White is the colour that reflects every colour of the spectrum, and black absorbs them all. So, we could say that white light contains all the colours. We’ve all seen and marvelled at that phenomenon of nature called the rainbow, which puts the colours of visible light in perfect order. The small drops of water, suspended in the atmosphere after rain, act like crystals that break down the white sunlight into the different colours that make it up.

Let’s turn aside from light and go on to sound. By analogy with light, white sound, or white noise, is spoken of, although I prefer to speak of sound and not noise.

White sound is that formed by the entire diversity of sounds that we can imagine. All the possible sound frequencies, i.e., all the imaginable notes, from the deep sound of a bass to the sharpest notes of a violin. It also includes notes that we often find dissonant or that do not fit into our musical scales. And all these sounds in different times, from micro-seconds to long-lasting sounds, and also in different intensities, from very soft to extremely strong. The colour of the sound can be added to this. It’s that quality of sound known as timbre. It enables us to distinguish the same note played by a trumpet or clarinet, or the difference in colour and timbre between people’s voices.

We could speak of sound using more technical language. In that case, we’d talk about frequencies and when speaking of white sound or white noise, we’d find that all audible frequencies were present at the same time.

Unfortunately, nature does not have a phenomenon that lines sounds up in order like the rainbow does with light. We might even ask ourselves where we can find white sound.

The experience of listening to the overlaying of different music in the Museum led me to think of a somewhat personal concept of white sound. I imagine white sound as a messy file containing all the sounds of the instruments and the music that are part of my life.

If we look to nature to find some sound that resembles white sound, we’d have to look to the sea. The roaring of the sea is a constant, changing, continuous sound. But where do we find a rainbow that puts it all in order and shows us these sounds? In this case, it’s a bit more difficult. Perhaps we could use a “sound sieve”, it’d be like a filter that would separate the notes, such as a sieve could separate shells and stones from sand. It’d be a sieve that separates melodies and instrument’s voices.

It’d be a bit of a difficult challenge to find such a device. Even though, technically, we can do it in a sound laboratory, I’ve chosen the imagination, music, poetry, memory and emotion for now. I know that every sound exists in the rumbling of the sea and that all the music that can accompany our lives are possible.

Now all I need to do is just walk along the seaside, immerse myself in its sound and slowly unravel some melodies. And, if I look carefully, I can see the instruments that give the sea its voice amidst the waves.

All sounds traverse the roar of the sea and, if I look carefully, I can see the instruments that give the sea its voice amidst the waves.