The territorial participatory bodies are: The City Participation Council may also propose points for the Municipal Council's agenda (up to twice a year), present candidates for the Barcelona Medal of Honour, validate the creation of a new participatory body and request the initiation of a participatory process.

The City Participation Council also includes the Protection Committee, the body that watches over citizens' rights regarding participation.

The City Participation Council is made up of the following members:

The city residents who wish to take part in the City Participation Council must be listed in the Citizens' Registry.

Barcelona City Council's Citizens' Registry is a way of grouping together citizens who have demonstrated their willingness to take part in the city's affairs through the City Participation Council or the Neighbourhood Council Monitoring Committee, which are municipal participation bodies. 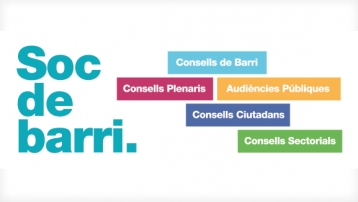 A neighbourhood council is a community empowerment and political participatory body for local residents regarding neighbourhood matters.

A Neighbourhood Council is a channel for citizen participation in the development of local-community public policies, which fosters social cohesion and improves the quality of city life.

Neighbourhood Council sessions are open to all local residents. It meets at least twice a year. They can also be convened through citizen initiatives, or a proposal from the Monitoring Committee from the same district, if there is a majority in favour.

The Neighbourhood Council sessions are divided into four parts: the first is for monitoring the main agreements adopted in previous sessions. In the second, the main points of order on the agenda concerning neighbourhood actions are discussed. In the third part, information is given, where necessary, on the current state of participatory processes, public consultations and citizen initiatives that are of interest to that neighbourhood.  The last part is a question and answer period for the general public, where they can ask questions about any subject concerning the neighbourhood.

The agenda will always be displayed on the municipal website prior to the session being convened, and any local resident may suggest the inclusion of a new point of order to the Monitoring Committee.

The Neighbourhood Council may take questions to the Full District Meeting through the Monitoring Committee, provided that a majority is in favour.

The Neighbourhood Council is made up of the following members:

The district technician assigned to that neighbourhood acts as secretary.

The Neighbourhood Council's Monitoring Committee is made up of:

In order to intervene in a Neighbourhood Council, you may request which question or subject you wish to discuss by notifying the Monitoring Committee at least two days before the session. You can also ask for the right to speak during the session.

A Public Hearing is a periodic meeting between municipal officials and the general public, so that they may receive information, as well as present and debate proposals concerning one of the district's public actions or activities.

A District Public Hearing is chaired by the president of the district. It meets every two months and it is open to all city residents.

During a Public Hearing session, there will be a municipal presentation and stance, followed by a question and answer period where organisations and individuals may ask questions, make comments and discuss the presented matter. The municipal groups may also intervene after every question and answer session, if they so desire.

Its specific composition and functions are regulated by each district's internal regulations.

Any city resident attending the session may take part in a District Public Hearing and may refer to any subject relating to the district.

Public Hearings are convened every two months and can be found on the websites of each district.