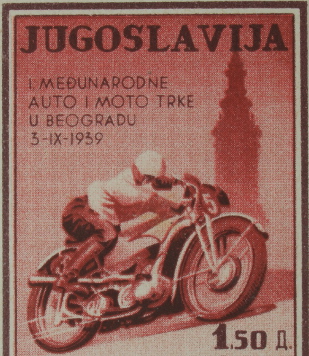 On 3rd September 1939, an exciting one-day motor racing event was held in Yugoslavia. At that time, nobody could have imagined that this Grand Prix would signal the end of peaceful coexistence; the Second World War broke out just three...

The stamp in question forms part of a philately series of four stamps with different postal values and featuring the images of different vehicles, which are shown as futuristic machines that evoke the idea of progress. Above the stamp’s face value, we can see a surcharge that may have been introduced to fund the extra costs caused by hosting the race. The designs (all by the artist M. Marković) are framed in an art deco style that was very common in Yugoslavia’s stamps and posters of the 1920s and ‘30s.

One might think that this race was no different from any other held at that time but, unfortunately, the Belgrade Grand Prix was unique for a number of reasons.

Belgrade, the capital of Yugoslavia (1929 – 2003), organised the race without knowing that it would go down in history as the only Grand Prix to be held during the Second World War. Only three days after the race took place, Nazi Germany invaded Poland. This represented the beginning of a nightmare that would define the future of Yugoslavia, which fell into Hitler’s hands on 6th April 1941. 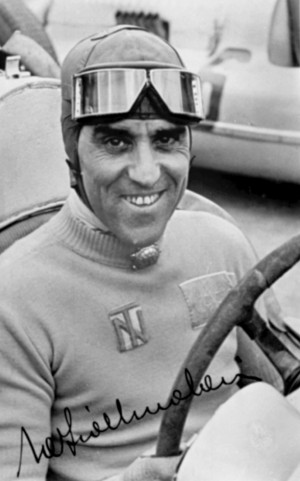 Tazio Nuvolari, The winner was 47 years of age. Wikipedia

Belgrade organised the race as one of the main events held to celebrate the 16th birthday of Peter II of Yugoslavia. There were a total of five drivers taking part, and who belonged to three different teams – Mercedes-Benz, Auto Unions and Bugatti. The Karmelegdan circuit, which was 2,794 km in length, attracted over 100,000 people who witnessed the relentless victory of Il Campionissimo, Tazio Nuvolari (1892 – 1953). The winner set a time of 1:04:03.8, while the German driver Manfred von Brauchitsch came in second.

The first Grand Prix category automobile races were held in France in the mid-19th century. The race circuits at that time were rudimentary earth tracks, and the cars were still subject to frequent breakdowns. But in spite of this, the phenomenon generated a growing interest amongst the general public, who came to watch the races between these early jalopies. But then gradually, technological development and experimentation with more aerodynamic models and lighter materials meant that by the early 20th century, many countries started holding these big races, which drew huge crowds. The best-known took place in the United States (1908), Monaco (1929) and the one we are focusing on today, the Belgrade Grand Prix (1939). All these races represented the origins of what we now know as Formula One racing.

During this first phase of the world of motor cars, the competitions were authentic showcases for the technical innovations made by the participating countries. The vehicles reflected the work done by engineers and mechanics, who did their utmost to build the strongest, most powerful motor vehicles. This demonstration of technological ability was used by different countries to flaunt their progress to the rest of the world. During these competitions, all political differences were temporarily put on hold until the race was over. 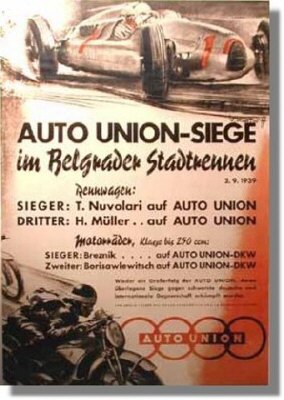 Before the outbreak of the Second World War, attempts were made to draw up an internationally valid set of rules and regulations for all motor car races. Because it was commonplace for these races to produce strange situations – for example, when the driver did not know where he was in the race in terms of his position, and sometimes there were cases when the driver had won the race without even realising it. In the wake of this general disorientation among drivers, Alfred Neubauer – the race manager for Mercedes-Benz – introduced flags and blackboards into races. This new system of signalling became indispensable to ensure that the drivers knew when they had to make a pit stop to fill up their fuel tank or to change tyres. Though this new system initially came in for much criticism, the resulting tactical improvements led to victories by such great racing drivers as Rudolf Caracciola, Hermann Lang, Manfred von Brauchitsch and Richard Seaman.

The start of the Second World War brought a halt to this attempt to systematise the racing rules, which would not be finalised until 1947. The competition was restarted after the Second World War with the celebration of a world championship Grand Prix at Silverstone (Great Britain).

The Belgrade Grand Prix stamp has gone down in history as a reminder of a country that no longer exists, and a historical period that was crucially important in the 20th century.