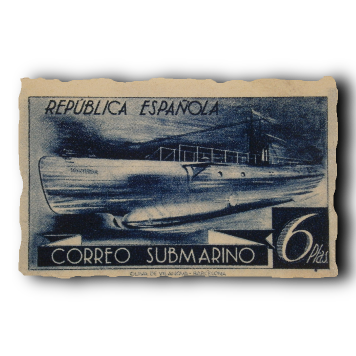 Submarine mail in the Spanish Republic

Stagecoach, train, aeroplane and pneumatic tubes – the postal service has used many different forms of transport over the years. Today we will be looking at one that is particularly unusual: submarine mail.

During the course of the Spanish Civil War, the Republican side used submarines to deliver post between the Iberian Peninsula and the island of Menorca. To commemorate this event, a series of stamps were issued that were unusual and highly interesting to philatelists, as they were groundbreaking in postal history. If you would like to see the series and the miniature sheets – which form part of the Marull collection – simply scroll down to the end of this article.

The hidden story behind these events began in the summer of 1938. The Republican forces had been mortally wounded by the failure of the Ebro offensive. But in spite of this disheartening scenario, the strategy of Juan Negrín’s Republican government was to prolong their armed resistance in the hope that a new European war was about to break out.

However, it was not easy to withstand the rebels’ attacks and continue resisting, as major funding was necessary. The war had seriously depleted the Republic’s treasury, and not only were they having difficulty feeding themselves, their military forces were also hampered by a lack of weapons and ammunition. Thus they needed to think up creative ways to overcome this dire economic situation.

One of their funding strategies involved issuing a unique and exclusive stamp series. It represented an opportunity to raise funds through a propaganda marketing operation, which was sorely needed in order to raise awareness about the threat being faced by the legitimate government. In fact, during the Civil War, publicity campaigns by means of posters and stamps were a common practice on both sides: for example, at the start of the war, General Franco issued more than 2,000 cartoons and stamps with the aim of discrediting the Republican government and promoting the National forces. 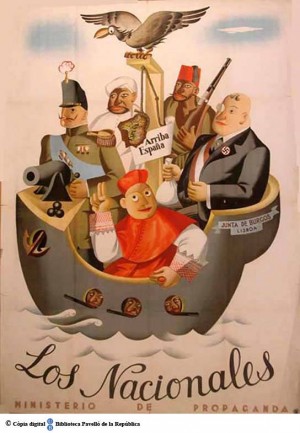 The publicity for the issue of the new stamps was achieved through a new form of transport that had never previously been used for postal deliveries: submarine mail. The Republican postal service placed up to 75,000 stamps (of different values – 1, 2, 4, 6, 10 and 15 pesetas) in circulation, together with a miniature sheet with a print run of 12,500 copies. The stamps were printed at the Oliva de Vilanova printing works in Barcelona during February 1938.

The ports chosen for putting this new method of communication into practice were the cities of Barcelona and Maó (Menorca), the only Balearic island that had not yet fallen to the rebel forces, and which remained a loyal bastion of the Republic, now isolated and cut off. Menorca’s situation was quite critical, as the breakdown in air and sea communications with the Peninsula meant that food was now being rationed. Furthermore, a new phenomenon had emerged on the island, as the scarcity of money for commerce meant that coins and notes were being replaced by stamps and locally-minted coins.

The submarine chosen for the task was the C-4, launched at Cartagena in 1929 and which, during the Civil War, had taken part in the military campaign to defend the Straits of Gibraltar. On 14th August 1938, the C-4 submarine embarked on a risky voyage to the island, challenging Franco’s military blockade. In addition to sacks of letters, the submarine also carried news about the progress of the war, basic foodstuffs and, most importantly, hope for resistance. Curiously, among the crew was an American journalist, Werner Kell, the war correspondent for The Saturday Evening Post, who had been commissioned to give a first-person report on the adventure. No doubt he was sent on request by a member of government to bear witness to the crossing and also to ensure that the story would be given coverage on an international scale.

The venture achieved its aim, and the submarine mail stamps were an unprecedented success. The stamps and the postmarks proved to be a popular innovation among philately collectors and investors, mostly on the foreign market, and specifically in France and the United States. In fact, while the sales value of the stamps was 690,000 pesetas, more than 11 million pesetas was made from the project. The submarine only made one voyage, carrying two sacks of correspondence (the idea was not to establish this as a regular mail transport line) and many of the letters delivered had been given a fictitious addressee with an invented address, which meant that the letter was sent back to the sender (a collector) duly bearing a postmark. 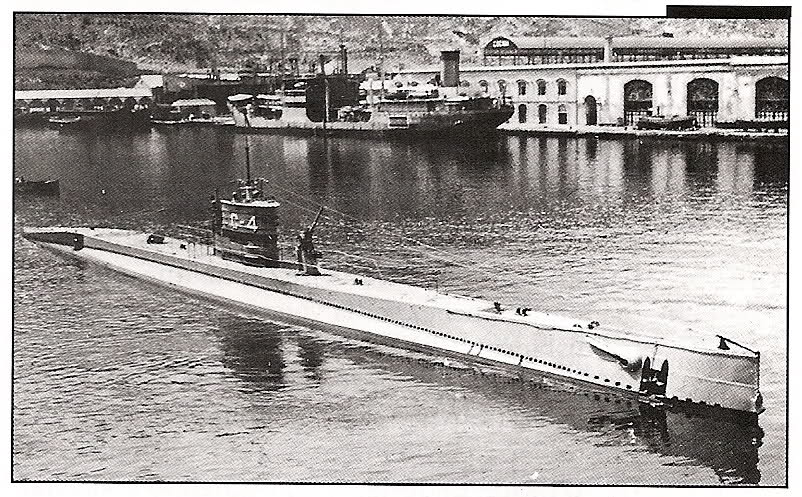 But to return to our story, despite all efforts and the fact that this enterprise did improve the Republic’s economic health somewhat, it did not succeed in overcoming the rebel army’s relentless occupation. The neutral countries’ refusal to intervene and the growing need for military supplies weakened the Republican government until it finally fell.

The submarine mail stamps are a testament to a historic episode that was unconnected to warfare; it was instead the result of ingenuity and imagination when faced with a complex situation. If you would like to know more about the story, we recommend watching the documentary “La guerra dels segells” (The war of the stamps, 2008), directed by Jaume Rodríguez, which narrates this rather curious chapter of the Spanish Civil War.