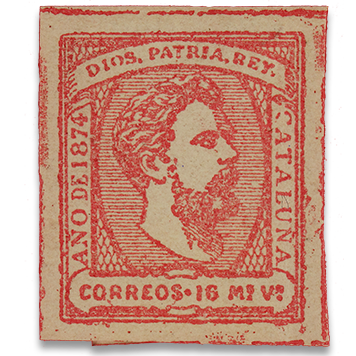 The Carlist Stamp of Catalunya

At the beginning of 1874, the Carlist watches of the General Francesc Savalls dominated much of the interior of Catalonia, so that the so-called Royal Army was able to establish a kind of civil administration at the Ripollès, Garrotxa and...

At the beginning of 1874, the Carlists watches of the General Francesc Savalls dominated much of the interior of Catalonia, so that the so-called Royal Army was able to establish a kind of civil administration at the Ripollès, Garrotxa and the mountainous parts of Osona. One way to make clear the presence of authorities in the area was to issue Carlist stamps.

Therefore, on the 1st of April of 1874, the General Fincance Quartermaster of the Royal Army, Francesc Solà, announced from his base in Sant Boi de Llucanes the issue of a stamp with a facial of 16 maravedises (equivalent to 12 cents of penny). The date of this stamps circulation was on the 15th of April of 1874.

As A. Tort Nicolau explains in the “Guide of stamps’ collectors of Spain” (1950, vol III, page 143), its elaboration was made by the printer from Vic Josep Soler i Arqués at the country house “”Els Ferrers” in Santa Maria de Besora, with the collaboration of Joan de Vidal i de Llobatera. Later, it became necessary to move the printing house to the country house “Clarella” in Vidrà.

The stamp of an effigy of Charles of Bourbon and Austria-Este, Carlist pretender to the crown of Spain, with the legend “God. Homeland. King”, above; “Correos • 16 MS Vn” (“vellon maravedises”), below; “Year 1874”, on the left: and “Catalunya” on the right.

The stamp was printed toothless in lithography, in sheets of cent stamps, in a very peculiar arrangement: a seal in the center of the first row and eleven rows of new stamps. Generally the arrangement is homogeneous: for 100 seals, 10 x 10 or 20 x 5, not the provision of 1 + 9 x 11 used here. At the head of the sheet there is the inscription “Real Army Of Catalunya”, and under “Communications” (on the left) and “100 stamps of 16 maravedises”

The design is well achieved; it is a pity that the scarcity with which the print jobs did, did not allow a good quality in the finish. It needs to be highlighted the modest conditions in which they worked: the hundred stamps were drawn one by one on an inked lithographic stone, and they used the sheets of paper that they had on hand.

The facial paid the post in the territory controlled by the Carlists. The procedure for international posts was more complicated and indirect: the letter had to go in an envelope with the address written and without stamps. This envelope was introduced on a second stamped envelope with Carlist stamps and sent to the person in charge of Carlist correspondence in Prats de Mollo. Inside the envelope French or Carlist stamps were added. In this case, the person in charge of the Carlist correspondence stamped the French stamps and it was charged the amount of money of the Carlist stamps that were not stamped. Then the original envelope, duly franked with French stamps, was brought to Correos and it started to circulate through the French postal system in complete normalcy.

Indeed, the irregular control of the territory by part of the Pretender’s army did not allow to establish an operational postal service and the use of postal stamps is more than doubtful. Above all it was used as a proof of payment of voluntary contributions in the form of fines and contributions that the Carlists imposed to the inhabitants of the occupied regions.

For this reason, once the conflict ended, there were many sheets of Carlist stamps in private hands. For this reason, they were available in the philatelic market and this made these stamps to be relatively common. These stamps were often postmarked posthumous (used outside the applicability period) or directly false. In order to demonstrate their circulation, it becomes necessary to check that the population was under a Carlist period on the date of the postmark. This is a not much known chapter of Catalan philately.

Charles of Bourbon photographed by Félix Nadar (around 1880). Source: Viquipèdia.

Extracted from A. Tort Nicolau in Guide of stamps’ collectors of Spain.