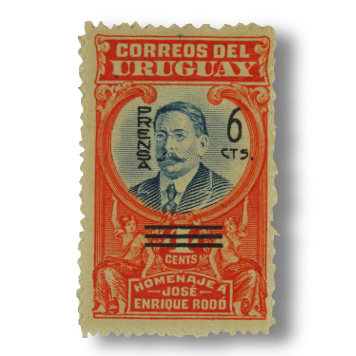 Newspaper stamps, past and present

Nowadays, thanks to the Internet we can receive news from all around the world in real time. But it hasn’t always been that way, and in the second half of the 19th century, the cost of transporting a newspaper via...

The Industrial Revolution, which began in the second half of the 18th century, had an enormous impact on the structures of society and economics. From that point on, and until well into the 19th century, technological improvements brought an increase in production which, combined with improvements in networks and forms of transport, resulted in the creation and expansion of new trade routes. Nations’ market economies forced their respective industries to produce efficiently using machinery that was similar to, or better than that of their competitors. Within this context, from the moment that the first big changes took place in the financial and economic world, newsletters, and subsequently the written media became essential to help people find out about what was going on in the private sector, and all the related news stories. 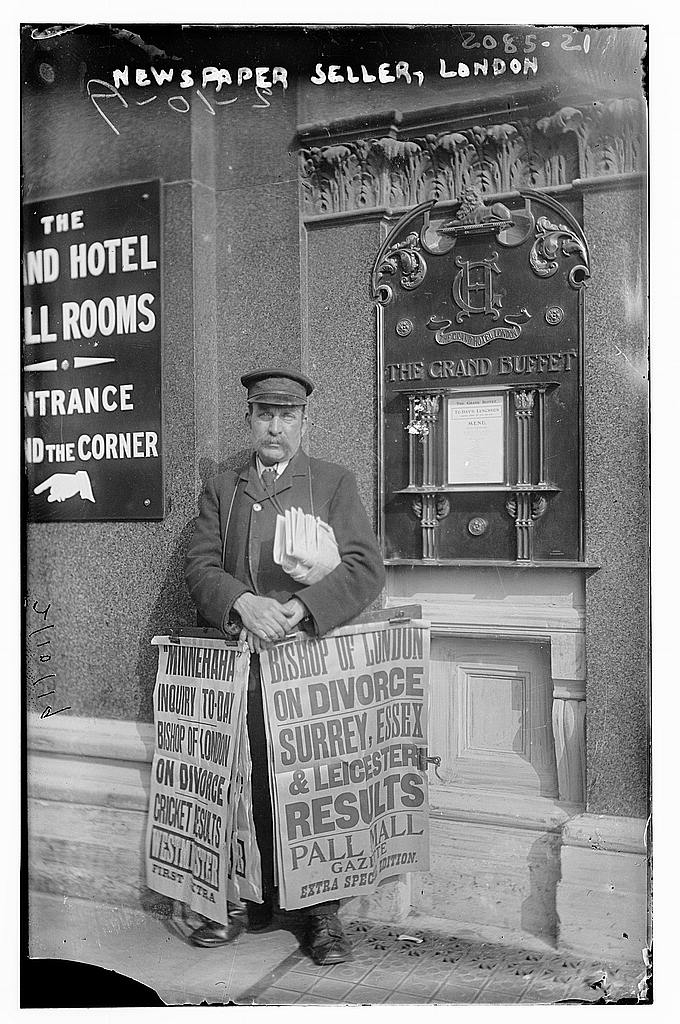 The first ever financial newsletters appeared in Britain and the Netherlands, in the 16th and 17th centuries, and were known as price currents. They were lists of products and raw materials detailing their prices at the time, and they were used above all for trading in port cities. As the years went on, the financial press improved significantly, with the aim of promoting trade exchange between different parties. During the 19th century, specialist newspapers appeared, including The Economist, Financial News and the Financial Times. The progress towards a capitalist economy was well underway.

As a result of all this, the financial markets became very attractive for small investors who wanted to use their funds to make money easily. The cartoon below shows a group of readers hurrying to the stock exchange to buy shares. In the inset on the left, the broker shakes the hand of the newspaper editor. The news story that the broker supplied to the editor has had the desired effect, and naturally, the deal is sealed with a gift of a lot of shares. 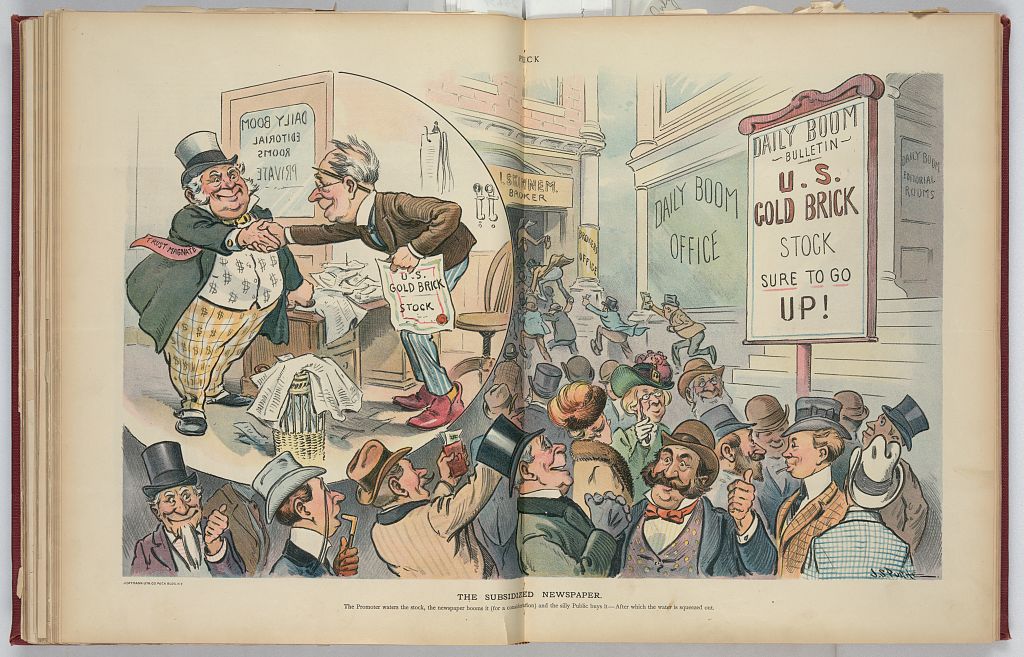 The specialist periodicals (and I refer here to the financial press, though they could be on any other subject) represented a great financial opportunity for governments. So much so that they brought in low postal import rates to cover the transportation of these periodicals by mail. Thus a new innovation in philately came into being – the newspaper stamp.

This new type of stamp was considered to have secondary importance in comparison with standard issue stamps. It did not possess the same prestige, since it was viewed as a mere transportation tax, and had a lower price than ordinary stamps. Furthermore, the newspaper stamp was rather exclusive in nature given that they could not be purchased by the general public; they were only available to publishing companies and the national issuing authorities.

Any new activity, when it first starts, tends to be carried out on a rather primitive basis, and newspaper stamps were no exception. For example, at first, the stamps were stuck onto each newspaper, one by one. This was a slow, clearly inefficient process, not to mention paradoxical if we bear in mind the fact that the information being sent (financial prices) was highly ephemeral in nature. And so this method was soon abandoned as it was quite obviously impractical. In turn, an agreement was reached between the publishing companies and the postal authorities to set a new postal rate, charged according to boxes of newspapers, not individual periodicals. This new system represented a great step forward, as now it was only necessary to stick a single prepaid stamp onto the delivery sheet for the packets of newspapers. In this way, the stamp acted as a kind of payment receipt. 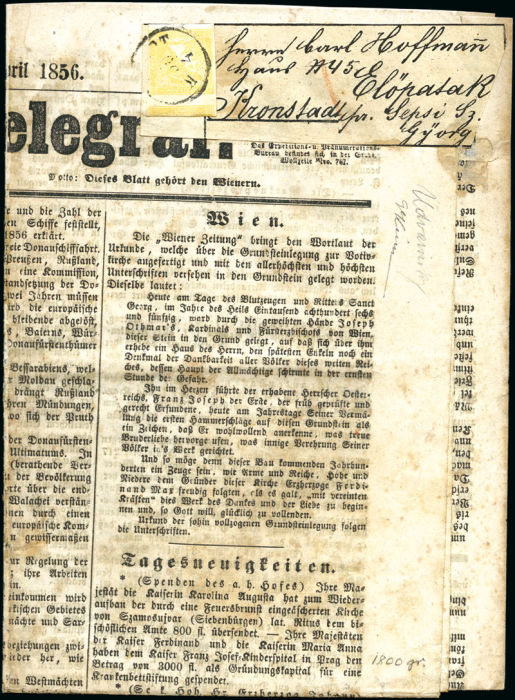 The first newspaper stamps were issued in Austria in 1851, and the Ramon Marull philately collection contains several such examples. And it should come as no surprise that the image used on these stamps is the figure of Mercury or Hermes, messenger to the gods and patron of commerce.

Austria’s initiative was subsequently adopted by other countries in Europe, and also overseas. In the United States, newspaper stamps began to circulate in 1865. They had a face value of $100, which was a small fortune in those days. However, on 1st July 1898 the US government suspended the use of newspaper stamps, and the remaining stock was put on sale for collectors.

The selection of stamps below gives a good idea of how diverse these types of stamps were. Most of them date from the second half of the 19th century and the early part of the 20th. In addition to stamps distributing financial periodicals, there are also stamps from what used to be Yugoslavia, and others specifically for internal postal deliveries in places such as the Austrian Empire, the Duchy of Modena and the city of Tarnow.

Newspaper stamps can now be found relatively easily on the philately market. They often appear following the sale of remaindered stock from postal administrations, and from the sale of receipts or company record books.

They are not the most attractive of stamps, or the rarest, or the most expensive, and so they do not tend to raise much interest in the world of stamp collecting. But even so, let’s give them their full due – these stamps were created to support the written press in all its specialist areas, which means that they can be considered as supporting actors in the growth of written communication. That’s no small achievement, is it?