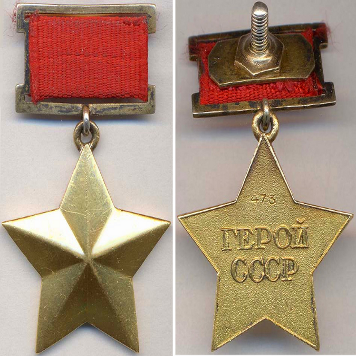 Heroes of the Soviet Union

The Gold Star of the Hero of the Union, the highest honorary distinction in the Soviet Union, was instituted by Stalin on 16th April 1934. The medal was awarded to people who had carried out extraordinary acts of heroism in...

For a very long time, the USSR issued and placed in circulation stamp series that have become known in the world of philately as Heroes of the Soviet Union. This philatelic category exists in parallel with the Gold Star of the Hero of the Soviet Union, a decoration given to people who had risked their lives heroically to serve the state. Conventionally, philately divides this subject area into three sections: firstly, there were the series issued before the Second World War, mainly devoted to rescue operations carried out in extreme conditions or polar exploration expeditions. Secondly, there were the series dedicated to the Second World War, mostly to war heroes; and finally, the series issued after the Second World War, and which were mainly devoted to cosmonauts and the leading figures of the party and state.

In this article we will be examining the series that were issued prior to the Second World War, and which can be found in the Ramon Marull philatelic collection.

The heroes of one of the earliest philatelic series in this category were the aeroplane pilots who took part in the search and rescue expeditions in aid of the crew of the SS Chelyuskin. This icebreaker had become trapped in ice floes in the North Sea in September 1933, while it was exploring the possibilities for non-icebreaking vessels to sail this new route. The extreme weather conditions and the lack of accessibility to the area meant that it seemed virtually impossible to rescue the ship’s more than 100 passengers and crew. The Chelyuskin had run aground on a block of ice, and even controlled dynamite explosions had not succeeded in freeing it from the ice floe. However, in the face of this absolutely desperate situation, and at great personal risk to the aviators involved, a complex air-sea rescue operation was organised. The operation to rescue over 100 passengers from the Chelyuskin took over two months to complete, in a situation of below-zero temperatures and terrible hardship. This heroic act is now considered one of the most successful of its kind in aviation history, and the press from all round the world reported on the story. The heroes in question were the pilots Anatoli Liapidevsky, Sigizmund Levanevsky, Nikolai Kamanin, Vasili Molokov, Mauriky Slepnev, Mihail Vodopianov and Ivan Doronin. And naturally, they became the first to receive the recently-instituted award of Hero of the Soviet Union. 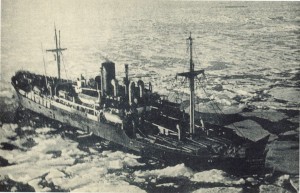 Another quite unusual story also involved aeroplanes. The airborne expeditions that linked the USSR with the United States of America by means of direct routes also resulted in the pilots receiving the important award. Below this article you can see some of the stamps celebrating the first and second expeditions that traversed the North Pole, joining Moscow with California. The pilots in the first expedition were Georgy Baydukov, Valery Chkalov and Alexandr Belyakov, while those in the second expedition were Mikhail Grovnov, Andrei Youmachev and Sergei Daniline.

The third story we are featuring from the series Heroes of the Soviet Union is devoted to the rescue of the scientific expedition Pol Nord-1 (1937-1938). The scientist Ivan Papanin and his team (which included Konstantin Badygin, Trofinov and Mihail Belousov) camped in the North Pole area for more than 200 days, carrying out scientific research. The scientists had arrived there by aeroplane, but when it was time for them to return, the weather conditions had deteriorated dramatically, and they had to be rescued by sea. The stamps commemorating this event show the scientific expedition welcoming the arrival of the ships (notice the flag). Once safely home, Ivan Papanin and his team all received the Hero of the Soviet Union award.

Finally, we are featuring three stamps from this series that are devoted to Paulina Osipenko, Marina Raskova and Valentina Grizodubova. On 24th and 25th September 1938, they flew a total distance of 5,908.61 kilometres (3,671.44 miles) in an Antonov ANT-37. Their story is a memorable one, occasionally hair-raising, but with a happy ending. Due to very bad weather conditions, they missed the airstrip at Komsomolsk, where they were supposed to land. When they realised their mistake, it was too late to turn round, as they were very close to the Okhotsk coast and, what was worse, they were running out of fuel. In light of this situation, Raskova received the order to abandon the aeroplane, and she crash-landed in a forest where she stayed for over 10 days before being rescued. Meanwhile, Grizodubova and Osipenko managed to crash-land at Komsomolks na Amune. The three women were part of the first women’s airborne expedition to achieve a direct flight route linking Moscow with Komsomolks na Amune, on the eastern edge of the Russian part of Asia. An incredible story that would be perfect for an action movie, wouldn’t it? 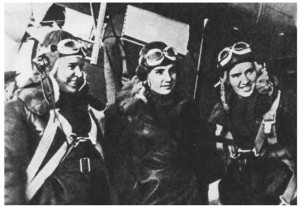