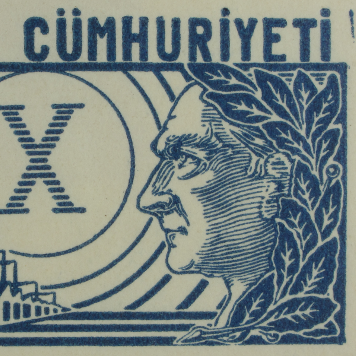 The Turkish president’s reforms represented a break with previous governments. During his mandate, many different political, economic and social changes took place. In this context, postage stamp series became an excellent publicity medium for the new system. As we shall...

Mustafa Kemal Atatürk (1881 – 1938) was Turkey’s first President. His rule has been viewed as a kind of enforced Europeisation. Known as the father of modern Turkey, the measures he applied completely modernised the way the country was organised. The most important measures included the declaration of Turkey as a secular state, the drafting of a constitution, the introduction of the Gregorian calendar and the imposition of more European styles of clothing. These attempts at standardising the country provoked protests from certain groups, who argued that the reforms showed a lack of sensitivity toward Turkey’s traditions and the differential features of its culture.

Education and culture became crucial tools for consolidating the reforms adopted. Below we will be looking at some of the most important changes in this respect.

Throughout this process, the topic of language was of great importance. Atatürk promoted the introduction of a Latin alphabet, suitably modified for writing in Turkish. This new alphabet replaced the old Arab one, which was duly abolished. This particular reform was extremely difficult to carry out, and numerous conferences and meetings were held to decide how it should be put into practice. However, according to accounts from that period, the adaptation process was very fast, and within the space of two years, literacy among the population rose from 10% to 70%.

The photograph below shows the president visiting the town of Kayseri in 1928. Beside it there is a stamp from the Ramon Marull Collection which commemorates the 10th anniversary of the introduction of the Latin alphabet. This stamp series is made up of six different stamp values, in green, orange, purple, red, brown and blue, respectively. They have all been digitalised for the collection’s search engine. 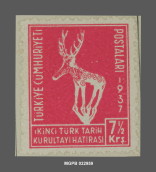 The growing interest in the country’s autochthonous history resulted in large amounts being spent on exhaustive research studies to find out more about pre-Islamic cultures, not to mention about the Seljuks and the Ottomans. These efforts to rediscover the country’s origins proved to be a veritable shot in the arm for Turkish nationalism. Among the various actions aimed at disseminating this new knowledge, a stamp issued to commemorate the holding of the second National History Conference.

But it was not only education that reached its zenith at this time; this new age also represented a revolution in terms of the way in which people understood their culture and heritage. Inaugurated in 1927, the Museum of Turkish Arts featured a series of ethnographic and artistic collections that exalted the cultural wealth of Turkey. The various pieces on show included sculptures; during the Ottoman Empire, such figures had been viewed with scorn, as they were considered to be idolatrous.

This was the first of a long series of interventions in the city’s cultural heritage. These were carried out with the twofold aims of highlighting the value of certain historic buildings that had fallen into disuse, and of renovating the more famous ones. In fact, one of the most controversial measures adopted during the reform period involved the temple of Hagia Sofia, in Istanbul.

Santa Sofia was originally conceived as an orthodox patriarchal basilica, until the mid-15th century, when it was converted into a mosque by order of Mehmet II, following his conquest of Constantinople (1453). The advent of Atatürk’s republic forced a new change when, in 1931, the building was closed and turned into a museum. The reasons for this change derived from a new strategic tourism plan. The resulting revenue and general economic impetus that were brought by tourism established the industry as one of the central pillars of the country’s economy, and which has persisted to the present day.