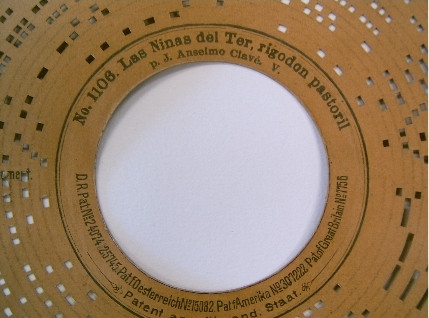 In 2006, a year after moving to the new building where we are now, a process of cleaning and restoration of some of the perforated cardboard discs from the collection of the Museu de la Música de Barcelona began.

We will take one as an example, Las Ninas del Ter, ridogón pastoril, by Josep Anselm Clavé (FSDP 0065), published by Herophon label, with which the following steps were taken by the restorer Sandra Vílchez.

At the beginning a general observation is always necessary, indicating the square shape of brown cardboard, the measures of 33x33cm, with the title printed in black ink. On the corners there are tabs in the shape of a half cane that are used to attach the disc to the instrument. On the four corners there are brass protections with a certain degree of oxidation.

The organoleptic examination indicated superficial dirt, general oxidation of the metal parts, mechanical tears in the perforations of the cardboard -produced by the same mechanism of the device that makes the disc sound or by careless handling-, and undulations of the support.

To ensure a good state of conservation of the cardboard, the following steps were followed:

Now in the following link you can read about the digitization process and, of course, listen to the cardboard discs here.