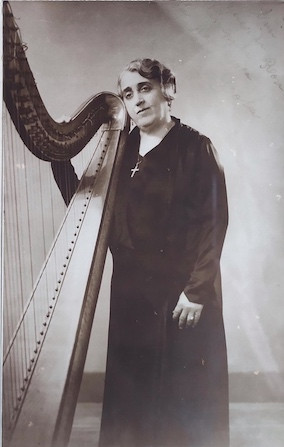 Dolores Sánchez, a harpist of the Orquestra Pau Casals

Every harp student at the Conservatori Municipal de Música de Barcelona has a certain feeling of family caused by our ancestor teachers, and I, as a harp pupil at that institution, bear witness to this.

I remember my the first harp class as if it was today.The wooden perfume, that beautiful instrument and a black and white picture on the wall showing a lady, irrelevant for many, and already forgotten. It is the picture of the first harp teacher at the conservatory: Dolores Sánchez, for us and familiarly, Aunt Lola.

The direct link and sisterhood with Dolores is given to us by the harpist Maria Lluïsa Sánchez (1922-2021) who left us this past January at the age of 98. A beautiful woman by nature with an iron health, from whom I have had the great fortune to learn, to receive a source of inspiration and to share unique conversations. Maria Lluïsa also collaborated with the Orquestra Pau Casals, and when she remembered the maestro her eyes lit up, a sign of her great devotion.

She was also the last surviving member of the founding musicians of the Eduard Toldrà orchestra, and was the harpist of the Orquestra Municipal in 1944 (now the OBC) from its beginning until her retirement in 1984.

On the other hand, Maria Lluïsa Sánchez was a harp disciple of her great-aunt Dolores Sánchez, whose mastery and history she has passed on to us.

Dolores Sánchez, one of the harpists of the Orquestra Pau Casals, was born in Salamanca in the late 1870s into a family of musicians: her father was an orchestra conductor and, seeing that the harp was a minority instrument and very much appreciated by the bourgeoisie, he went to Paris to study the harp with Conrad-Prumier. Later, on his return, he taught his two daughters, Juana and Dolores Sánchez, to play the harp.

At the end of the 19th century, the whole family moved to Barcelona and the Sánchez sisters began to play the harp at the Gran Teatre del Liceu, then called Liceo Filarmónico Dramático.

It was in February 1928, when the conservatoire moved to its actual premises in the corner of Bruc-València streets in Barcelona, that harp classes began. An anecdote that gives us an insight into the context of the time is that the position of harp teacher was at first directly assigned to a woman from high society, but musically untrained.

Dolores Sánchez, who already worked regularly in the orchestra under the direction of Pau Casals and had a great command of her instrument, did not agree at all. For a whole week she took her harp on a horse-drawn cart to the place where the members of the conservatoire's management team were having lunch. She would stand in front of them and give them a harp concert. At the end he would say: "This is how to play the harp", and then she left.

The school's management team became aware of Dolores Sánchez's personality and talent and finally granted her the position where she taught harp until her retirement in 1939. She was renowned for the musicality she achieved in her students and for being a very demanding and strict teacher. While she taught at the conservatory, her sister Juana gave lessons at home to the upper middle class, such as the Burés i Juncadella family. In the Érard harp purchase register in Paris, we find a harp bought in 1902 by the Sánchez sisters in Barcelona.

Here are the two photographs we have of Dolores, the one from the harp classroom at the conservatory (at the top), and one in the magazine Feminal, issue 22, November 1909, where she appears with her pupils.