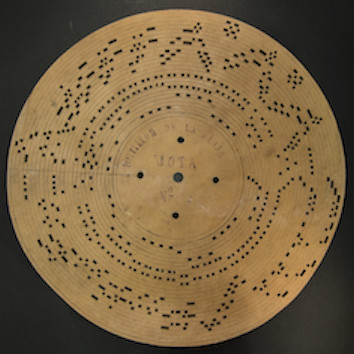 Anyone who has visited Menorca between the 23rd of June (Sant Joan) and the 8th of September (Mare de Déu de Gràcia) will easily have lived one of the town's major festivals, one of the elements of which is the so-called jaleo, when, while the horses pass through the square and jump, a brass band plays a piece with this name. And it is called jaleo but we know very well that it comes from a piece of zarzuela by Luis de Olona and music by Cristóbal Oudrid, El Postillón de La Rioja, composed and premiered in Madrid in 1856. This piece is the Jota estudiantina, and we have just found a recording from around 1900.

Who Oudrid was and how the jack arrived in Menorca are explained both on the website of the Inventari de Patrimoni Cultural Immaterial de Menorca, and in a more recent post by Lluís Sintes El Postillón de La Rioja i el nostre "jaleo", in short, as explained on the inventory page (Camps, 2019):

Traditionally, it is said that the music of Jaleo arises in the festivities in Ciutadella in 1888. For some years, in order to animate the Caragol des Born and the Jocs des Pla of the San Juan festivities, the Banda Popular, created in 1880 and directed by Guillem Alba Llorens, played some fashionable pieces, and that year the interpretation during the Caragol des Born of the jota de El postillón de La Rioja, caused a furore. The piece was very popular at that time in the musical concerts and theatres of the late 19th century in Menorca, and its inclusion in the horses' gait when they did the three laps of the Caragol des Born caused them to jump and pirouette, hence its name, jaleo. This music became so popular that it was incorporated into the festivities of the rest of the towns of Menorca and is the piece that sounds uninterruptedly and repeatedly during the central act of the festival, the Jaleo, to which it has given its name.

And now that we know how the work arrives and is transmitted on the island of Menorca, let's see if, being so popular and performed thousands of times -especially in summer- recordings have been made or not. To begin with, we must look for this music under the two possible titles, the original Jota estudiantina and the Jaleo, from a work that was born for choir and orchestra (or arrangement for piano), and which ends up becoming a band piece.

Recently, looking for Jaleo, we find the version for wind and percussion band of the years 1990, 2000 and later made by the Banda Municipal de Ciutadella, the Banda de Ferreries or the Banda Nura. We will find a version for symphonic orchestra in the zarzuela costumbrista with lyrics by Joan Benejam and music by Francesc Rosselló, Foc i fum, recorded on vinyl disc in 1985, just celebrating the centenary of the work. There are also versions made by folk groups in the 1970s, such as those of the Grup C.P.E.P. (1977) and the Grup Folklòric de Maó (1981). Except for the version included in Foc i fum, the rest will not be found on streaming music platforms. We will, however, find a curious but reliable version made by Los Gatchos, with the title Jaleo de la Ciutadella [sic]. Bep Cardona, in a personal web, gathers a great part of the Menorcan discography and through the search engine we can see which groups have versioned this jota.

On the other hand, pulling the thread back, if we look for Oudrid's Jota estudiantina, we can find both in the CCUC's catalogue (Catàleg Col·lectiu d'Universitats de Catalunya and which includes the Biblioteca de Catalunya), and in the BNE's catalogue (Biblioteca Nacional de España), printed scores, but no sound recordings. And research leads us to printed catalogues such as this one of Gramófono, which shows that in 1917 two jotas of El postillón de La Rioja were published but, despite their popularity, neither of them was the Jota estudiantina, but Caleseras and Canción del pajarito. According to Allan Kelly's catalogue, they were recorded in 1911 and 1912, although the catalogue does not specify which jotas they were, but everything points to them being the two mentioned.

And here comes the surprise: after having photographed the cardboard records for the company Accenture to carry out the samplerization for the Museu de la Música, listening to the results and still without having catalogued the discs, we listened to a tune that, if you are from Menorca, you are not indifferent. When we looked for the image of the record, with the ink somewhat erased, we could read, precisely, El postillón de La Rioja, Jota Nº 2.

These discs, the cardboard ones, were produced between 1880 and 1910, approximately, and, taking into account the operation and the technical capacity, most of the parts are simplifications. In spite of this, it is still the oldest recording of the well-known Jaleo and you can listen to it here. The arrangement and the special taste of the period we believe give it a charm far superior to the limitations that this sound reproduction technique had.

As for the music we hear on the cardboard record, and thanks to the analysis of Martí Guasteví, musician, he explains that the structure has not changed much in the sections of the current recordings, although over time some licenses have been taken, inevitable with the mechanical limitations of the late nineteenth century. If we divide the current Jaleo into four parts, where we find the most notable difference is in the second part. The other three parts (first, third and fourth), have been preserved almost intact, despite the possible re-interpretations or variations typical of the passage of time.

The question would be to understand why such an ancient and popularised melody, performed so many times - not only in Menorca, but also in Mallorca and Catalonia -, has hardly any discography within reach. Bep Mercadal, a Menorcan musician, points out a curious fact: it was not until the 1960s that the technology needed to make sound recordings in Menorca arrived. This would explain why there is such a huge gap of years in which we do not find any production. However, we can see that some Menorcan musicians went to live outside the island, and did make many recordings, such as the cupletist Pilar Alonso and also Maestro Demon, from the Demon's Jazz Orchestra (who was actually called Llorenç Torres Nin) and who, attention, made a version with Antoni Planàs of the ruckus in this 1932 waltz: Dale de betún (thanks also to Bep Mercadal for the discovery!).

It is necessary to think why a work -the zarzuela- so popular on the island, and surely also outside it, has never been recorded -or we have not found it yet- except on a cardboard record with limited technology of a mechanical music instrument of the late nineteenth century but, despite everything, the closest to the original sound, at that time.