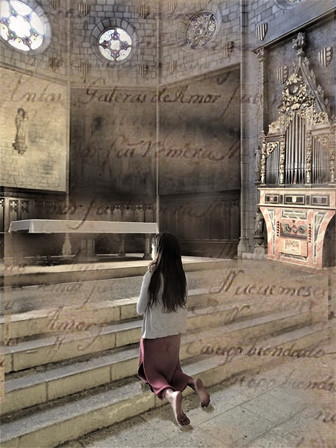 Of secrets and guilt

We don’t often think of musical instruments as holding “secrets”, but organs do. If, however, the word is ‘guilt’, we could easily think that something isn’t adding up. Let’s take it step by step, and yes, let’s focus on the organ.

From the Middle Ages to the present, organs have been the customary instrument that has accompanied religious liturgies in churches and cathedrals. All organs, from the small portable organs of the fourteenth century to the great organs of cathedrals, work in the same way. And, of course, they all have a “secret”.

If we break it down into a simple diagram, we can say that an organ operates as follows: the bellows produce wind (air); that wind is distributed through ducts and valves that are triggered from the keyboard and the gates of the stops and, finally, sound is produced. As the air reaches each tube, it generates a note determined by the key and by the pallet the organist has operated.

After discovering that, you might ask, “So, where’s the secret?” The secret of how an organ works is in the air reservoir inside the instrument. This important space is also known by other names, such as the wind chest. The moving air generated by the bellows goes to the reservoir, which is hidden from view and thus it’s a well-kept “secret”; there it is compressed at a pre-determined pressure. The valves, activated from the keyboard and the stops, carry the air to each tube selected.

Perhaps we could delve a little deeper into the complexity of this instrument that, at the hands of anonymous people, has accompanied religious worship for centuries or has been played by other hands that have left a lasting musical legacy. Let’s leave aside how organs function and their music for now and try to discover other secrets hidden among the wooden pieces of this instrument.

An old organ, even one no longer able to produce sound, is a historical document that can provide us with a great deal of information. Its construction, pipes, stops and decoration can give us clues as to its age and where it was built. If we think of a 17th or 18th century organ, it will undoubtedly have undergone changes over time. As musical styles change with the passing of years, many instruments are transformed to adapt to those new times. Adding or changing pipes is a common occurrence in a Baroque organ but doing so also changes its tuning. It is common to find modifications of the length of the pipes on a Baroque organ to adjust the tuning. Following a process of researching and restoring an organ is not simply a technical analysis of the instrument; rather, it’s a gateway to the musical knowledge of the past. 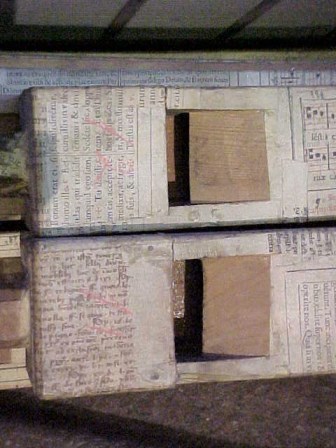 Organs are mainly made of wood. In fact, apart from the lead and tin pipes, everything else is wood. Any change in temperature or humidity implies contractions and dilatations that will affect the instrument’s structural fittings. Maintaining an organ in good condition was expensive and techniques for doing so were often used that could be described as “non-professional”. One example would be if a wooden pipe cracked. The loss of air meant the pipe went out of tune. The normal way to solve this problem was to glue a piece of paper around the pipe in order to prevent air from escaping from that spot. Needless to say, the papers used were documents that no longer had value or usefulness. Recycling was part of life.

To delve deeper into the secrets that organs can teach us, it is perhaps worth focusing on a specific instrument. The Museum of Music’s MDMB 820 organ demonstrates all the topics we’ve mentioned, but it can also show us a little something “extra-musical”. Here’s where you’ll begin to see and understand why we titled this paper “Of secrets and guilt”.

In 2000, the former headquarters of the Barcelona Museum of Music in the Quadras Hall was being closed. All the instruments were packed and transferred to the new space, where they were restored for the new exhibition at L’Auditori. The work of taking the organs apart and packing them was done by the Taller d’orgueneria Grenzing [Grenzing Organ Workshop]. In that process, we documented the state of conservation and each instrument’s possibilities of restoration and exhibition.

The MDMB 820 organ had very little documentation. In the process of dismantling it, it was found that it was in quite a delicate state of conservation and would be difficult to restore; so, we chose not to exhibit it. It is currently well-packed and documented and is part of the Museum’s storage collection. In the future, a research project and a possible partial restoration could provide us with new data.

Most of the pipes are made of wood and their cracks are hidden from sight by paper documents glued to their linings. A study of these documents could give us clues to the places where it has been. It’s normal for an organ of these characteristics to be transferred at one time or another to a different convent or church. Interestingly enough, the photographs taken during the dismantling process demonstrate that the documents wrapped around the wooden pipes are from different periods. This fact confirms that this type of restoration was a constant in the life of an organ. We find liturgical documents, probably taken from books that were no longer used, with Latin text and ancient musical notation. There are also handwritten texts and other printed matter of different provenances. One example is a printed text from the Ávila City Council, or some humorous texts from a publication written in Spanish but with a few expressions in Catalan. A thorough study may provide us with more specific insight, but we can be nearly certain that this organ travelled around the peninsula before landing in the hands of a wealthy Catalan family, who sold it to the Museum of Music in 1963

Among the documents glued to the tubes, there are some that did more than just heal their wounds (cracks). Originally, and we don’t know when or where, they were used as a confession of a girl’s guilty secrets. We don’t know if she did so willingly or if she was forced to take the blame in those papers. Perhaps it was the fruit of a desire that was punished, or a prohibited love that was unacceptable. Maybe it was the innocence of youth, or deception, lies and power. It could have been the story of the life of a girl and her consent, or the brute and violent force of a man. We don’t know. We only know that those tubes continued to make music and vibrate the words written by that girl for years. Perhaps other women made their love and desire come true with the music that came from the tubes of this organ. But she, with sincere repentance or under the imposition of whoever believed they had the truth, wrote the same words over and over: 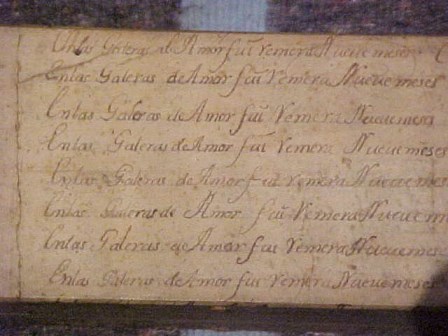