In 2015 some members of the team of the Museu de la Música, located in the Auditori de Barcelona, traveled to the city of Vienna to see first-hand the interactive proposals of the Hausdermusik - Das Klangmuseum, especially the one called 'Maestro! Maestra!' dedicated to orchestral conducting.

At that time, the Museum's management had a clear desire to find new ways of approaching music through immersive and interactive experiences, and the House of Music – Museum of Sound in Vienna was a European pioneer in the use of Kinetic technology for multimedia musical experiences in which the visitor becomes an indispensable part of the staging.

The materialization of the project became possible a few years later thanks to funding from the 'Convocatòria d'ajuts PO FEDER de Catalunya 2014-2020' of the Department of Culture of the Generalitat de Catalunya which, in its axis dedicated to Cultural Heritage, supports actions in the field of performing and musical arts facilities in the country.

In September 2019, the audiovisual recordings of the two works chosen for the interactive installation that, intentionally, belong to a universal musical collective imaginary: The Ode to Joy from the Ninth Symphony by L. van Beethoven and the Prelude from the Opera Carmen by G. Bizet were carried out in the Symphonic Hall of the Auditori.

The OBC, under the baton of maestro Xavier Puig, counted with the participation of the professional choirs Madrigal and Lieder Càmera, conducted respectively by Pere Lluís Biosca and Josep Vila i Casañas, while the Banda Municipal de Barcelona recorded the Prelude to the Opera Carmen conducted by its principal conductor José R. Pascual-Vilaplana.

Guillermo Barguñó was in charge of video direction and editing, and N Music Production was in charge of sound recording and mixing. In parallel, the conceptualization, design and production of the interactive installation were entrusted to Grup Transversal, a Catalan company with extensive experience in the use of cutting-edge technologies and innovative engineering for the creation of immersive and interactive museum spaces. The development of the Kinetic gesture detection system, on the other hand, was the responsibility of research doctor and software engineer Álvaro Sarasúa, linked to the Music Technology Group of the Universitat Pompeu Fabra of Barcelona (PHENICX Project - ESMUC / MTG), while the company VoctroLabs carried out the audio processing.

The work of all the parties involved culminated in September 2020 with the inauguration at the Music Museum of the space Dirigeix l'Orquestra, dirigeix la Banda, which invites visitors to experience for a while the sensation of being at the head of a large orchestral formation, conducting with their own gesture and in real time the performance of works from the great symphonic repertoire. 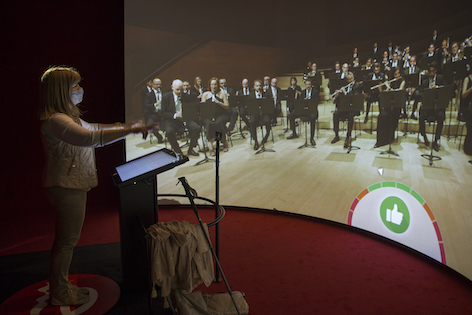 The installation is located at the end of the tour of the permanent exhibition, in a circular space equipped with a large surround screen and a Dolby Surround sound system, which provide an immersive experience. The user is invited to place himself on the directional platform and receives a series of useful indications to proceed properly. A digital screen acts as a music stand and dynamically displays the score of the selected piece. The signals received by the motion capture camera are translated and interpreted by a computer that modulates the interpretation of the pieces by the musicians and during the action a speedometer appears on the screen to guide the user on the speed limits of the performance. The user's ability to adapt to a greater or lesser extent to these limits will determine the final assessment of the musicians themselves on the user's conducting skills, who may be encouraged to stay on the path of orchestral conducting or invited to devote his talent to other tasks.

This interactive space aims to offer the nearly 45,000 people who visit the Museu de la Música every year the opportunity to get close to the real experience of conducting two great instrumental and choral groups, enjoying universal works and testing their rhythmic and gestural skills.

Another way, in short, to live music intensely.