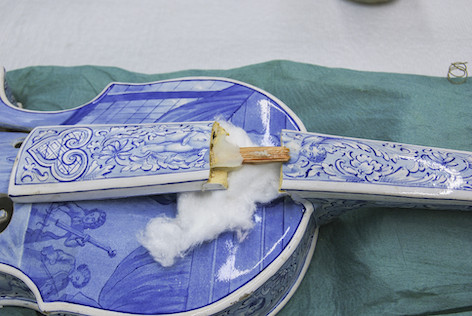 From the store to the exhibit

by Esther Fernández and Sara Guasteví

The Museu de la Música de Barcelona currently has around 3,000 musical instruments and related objects. Of these, only about 500 are displayed on the permanent exhibition, while others are stored in the reserves or form part of loans and temporary exhibitions of other museums or institutions.

The decision making process on displaying -or not- an instrument depends on many factors: the museological discourse, the state of conservation of the instrument, the sound possibilities, the uniqueness of the piece (by period, by construction, by geographical origin, etc.). When we moved to L’Auditori in 2007, one of the aims for the permanent exhibition was to be flexible and to allow us to change instruments from time to time. But the fact that the labels were silk-screened on the display cases made it less flexible than we had ideally imagined. It was in 2017 when we began a transformation that seems minuscule but took months of work and years of willpower: changing the lighting, changing and improving the documentation on the labels, making them mobile, relocating instruments to improve the museological discourse... Marisa Ruiz talked about it in this post.

Once the technical and theoretical issues have been overcome, we must move on to action. When it is decided that an instrument that has been in a reserve for many years will become part of the permanent exhibition, it is not a question of taking it and putting it in the display case: it is not that simple.  Let’s take a look t it on the basis of a specific instrument: the Delft violin.

This is a very particular violin: it is intended for aesthetic rather than musical use (in fact, if we were to tune the strings, it would probably burst), it is made of ceramic and has a powerful bluish colour that was in vogue at the time, at the beginning of the 18th century.

In 2013 our team proceeded with a careful organoleptic examination which indicated that part of the pegbox that adjusts the fourth peg was broken and the material was missing. The lower part of the neck was broken and not very thinly glued.

The proposed intervention was cleaning general dirt and glue residues, ungluing and re-gluing the neck (it had movement, which means that it was not well adjusted), and finally reintegrating a piece of porcelain to the pegbox.

This process involved the following steps:

When we unglued the neck we saw, once it was opened, that in a previous intervention wood had been put inside it to act as a sound post and the glue used was a white glue applied only on the inside.

The before and after pictures speak for themselves. You can see it here and also in the permanent exhibition, in the space dedicated to Classicism.

There is another museum that exhibits a twin: the Delft violin of the Rijksmuseum. If you look around a bit, maybe you will even find a Dutch website selling modern examples of this type of violin as travel souvenirs.