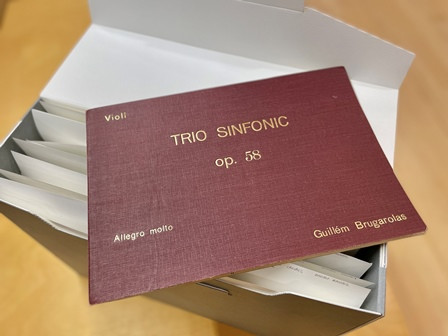 Guillem Brugarolas i Canals, a musician between the wars

by Oriol Brugarolas, historian and researcher

Guillem Brugarolas Canals (Barcelona, 1889-1959), was an industrialist from Barcelona who knew how to combine the family business (he was in charge, together with his two brothers, of the chemical company Brugarolas S. A., dedicated to the manufacture of lubricants for industrial machinery) with musical activity, centered on composition and the organization of musical and literary evenings in which musicians, singers and poets of the time participated. 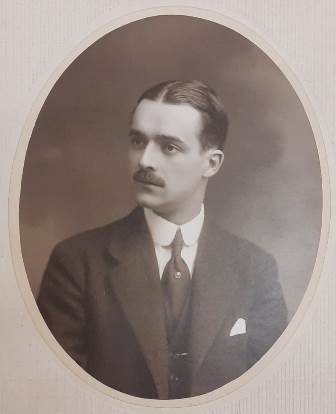 It is not known if he studied at the conservatory or received private lessons and who his teachers were; but what is known are his musical preferences, thanks to his musical library kept in the private home of one of his descendants: above all the works of Beethoven (piano sonatas and trios), Schubert (impromptus and sonatas), Mendelssohn (all his piano works), Chopin (ballads, waltzes and preludes) and Wagner (the piano reduction of practically all the operas) predominate, and to a lesser extent we find works by Mozart (sonatas for violin and piano), sonatas by Muzio Clementi and even piano reductions of some zarzuelas. His tastes are in line with his social and economic position: a wealthy man belonging to the industrial bourgeoisie of Barcelona, conservative and very religious, who was linked to the Lliga and who fully identified with the Germanic cultural trend of the first quarter of the twentieth century.

So far it is known that he wrote seventy musical works, of which fifty-one are preserved, and among which we find two works for the same number of opus (op. 63). Brugarolas Canals' creations are dominated by solo piano pieces (Íntimes 2n i 3er quadern), songs (for voice and piano with texts by different poets, such as Joan Maragall, Francesc Pujols, Josep Maria López-Picó and his friend Miquel Melendres) and trios (with the classical formation of violin, cello and piano); He also wrote duos for piano and violin, two string quartets, a work for choir and piano (Himne) and a piece for cello and piano (Pregant), of which a version was made for violin, cello and organ and another version for string quartet.

It is curious the brevity of his creative period, which embraces from 1918 to 1933; after the Civil War, Brugarolas Canals stopped composing, the reason is unknown: perhaps the horrors of the war disturbed him too much, or the work of the family business absorbed him completely or, simply, musically he had nothing more to say.

The fact that he married Eulàlia Rocamora Rosés (daughter of Antonio Rocamora Pujolà, heir of the founder of the largest soap company in Spain, Rocamora e Hijos) in 1917, together with the good progress of his family business, allowed him to dedicate himself to music without any worries, to the point of never taking care of promoting his music, nor of looking for a publisher for his music, nor of disseminating his music beyond the private sphere. Brugarolas Canals organized musical and literary evenings at his home, the first almost weekly, the others more sporadically. His friends often participated, such as the violinist and professor at the Conservatori del Liceu Joan Altimira, the cellist Francesc Pérez-Prió and the singer Conxita Badia (to whom he dedicated the work Estacions). It is almost certain that the repertoire of these evenings included works from Brugarolas Canals' personal musical library (Chopin, Beethoven, Schubert, Wagner...), as well as his unpublished works to be premiered. It is no coincidence that he composed so repeatedly for trio (piano, violin and cello) and for voice and piano, as these were the usual musical formations in these gatherings. It is worth mentioning that in 1918 Brugarolas Canals had a half-tail Steinway piano brought from New York (still preserved by one of the musician's descendants), quite an event for the time.

During his lifetime he only published three works: Estacions (opus 34 to opus 39), a work for voice and piano (the text are poems by Joan Maragall) and published in 1924; Pregant (op. 30), a work for piano and cello, published in 1927; and A l'àngel de la guarda (Himne) (op. 59), a composition for choir and piano commissioned by the Piarists to be the school's hymn, published in 1927. Moreover, the dissemination of the work during the composer's lifetime was practically nil; there is still evidence that the adaptation for violin, cello and organ by Pregant was performed in August 1931 in the church of Lloret de Mar on the occasion of the inauguration of the organ, and that the Trio op. 21 was performed on April 23, 1939 at the Paraninfo of the Faculty of Medicine with Francesc Figueras de Barberà on piano, Joan Altimira on violin and Francesc Pérez-Prió on cello, the latter two being regulars at the musical evenings at the composer's house. 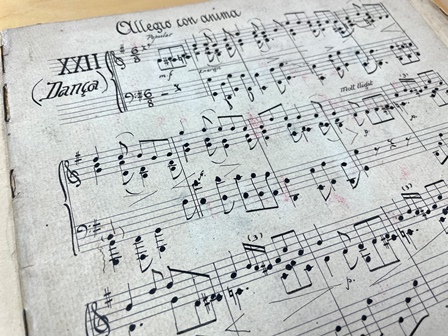 The style of Brugarolas Canals' works is an original mixture of the great romantic tradition (Schubert, Chopin, Schumann and Wagner), the clear influence of Enric Granados and an evident reference to Catalan popular music. This particular style can be appreciated above all in his piano works, which are short pieces with an intimate character, in which the simplicity and formal clarity present in all of Brugarolas Canals' work stands out; likewise, in almost all of his works there is a very vertical type of writing and chorale-like texture, which makes the sound of this composer's works unmistakable.