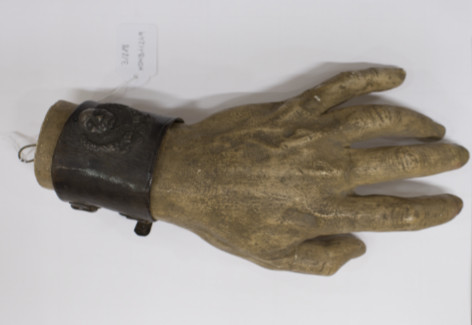 by Marisa Ruiz, Head of Collections

Musicians' hands have been the subject of mythomania since the 19th century, when romantic virtuosity turned the craft into legend. The public attributed almost supernatural qualities to performers, and the hands of pianists, guitarists and violinists became cult objects, relics to be venerated.

In the Museum of Music we have nine sculptures of musicians' hands from the early 20th century. Of the musician and composer Enrique Granados, who died 105 years ago today, we have four examples, all of them left-handed, modelled in plaster and in the position of playing the piano. An interesting detail is the presence, in two of the hands, of a leather wristband with a miniature effigy of Ludwig van Beethoven.

There are also two reproductions of Miquel Llobet's hands, although they are quite different: the left hand is open on a surface, with the fingers stretched out, and the right hand is in the position of playing the guitar. They are also moulded in plaster, as is the right hand of the pianist Carles Vidiella. The only hand sculpture of which we know the author is the left hand of Ricard Viñes, cast in bronze by the famous sculptor Josep Clarà, from Olot. More modern are the hands of the French pianist Yves Nat, modelled in plaster by the Italian sculptor Edoardo A. Minazzoli.