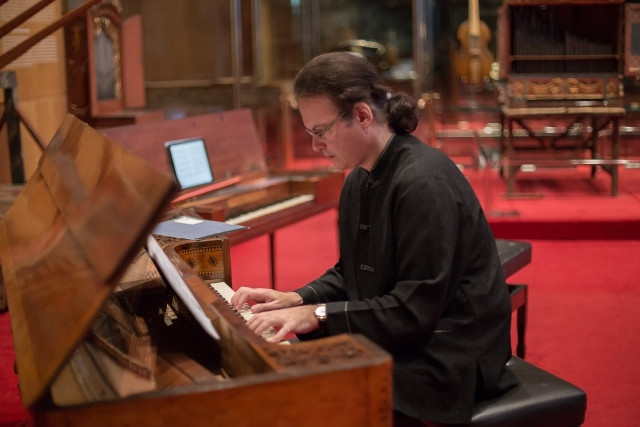 by Marina Rodríguez, pianist and researcher

It is unusual to hear a performer playing different keyboards in the same concert. Michael Tsalka is an expert at this. His constant concerts around the world combine all kinds of instruments, historical as well as modern, with repertoires that include works ranging from the Baroque to the present day. This musician’s convergence with the instruments from the Museum has enabled us to particularly enjoy an unusual repertoire.

Throughout the 18th century, the harpsichord and the newly invented fortepiano coexisted and shared a role and repertoire. Scarlatti himself experienced this very early on as, in addition to a harpsichord, he had access to Cristofori pianos in the Spanish court. As a composer, Scarlatti was one of the main influences on Clementi, the musician who links together the authors in this programme. We have heard Scarlatti sonatas played on two of the Museum’s instruments. Thanks to its recent restoration, we have been able to enjoy the delicate sound of the Zumpe & Buntebart square piano (London, 1776). Johannes Zumpe made small, low-cost square pianos that reached people from different social classes. We have also heard Scarlatti on the Christian Zell harpsichord (Hamburg, 1737), one of the Museum’s gems and of which there are only three left in the world. The rest of the programme was played on the Miguel Slocker square piano (Madrid, 1831). Its louder, more powerful sound, sustain pedal and broader range make it suitable for performing those works of the concert that are more suitable for piano.

As well as composing, Clementi made all kinds of pianos, and his square models are not unlike this Slocker piano. Of his works, we have heard the variations on the French song Au clair de la lune, published in 1821, and the Scena Patetica, a free-form fantasia included in the Gradus ad Parnassum, Clementi’s masterpiece written between 1816 and 1826, a compendium of his art and a work of reference for all romantic pianist-composers. Ferdinand Ries’ Fantasia, Op. 109, is a piece of programme music composed in 1821 and based on the poem Resignation by Schiller. A pupil of Beethoven’s, Ries worked in London for a few years. There he met many musicians, including Clementi, to whom he dedicated a piano concerto. Moscheles, who also lived in London for some time, was a great friend of Clementi’s. Three guests who stood out at a party held at his home with their lively chatter were precisely the soprano Henrietta Sontag, Clementi and the writer Walter Scott. In the work we have just heard, the protagonist is another singer, Giuditta Pasta, as famous as the one mentioned above. Moscheles used some of the arias he used to sing to compose the fantasia Pensieri alla Pasta.