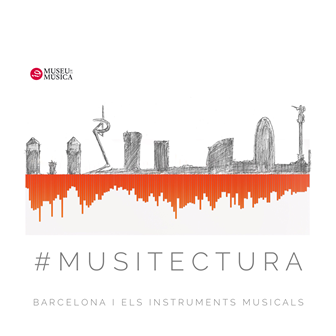 Musical instruments in the city

Cities are the ultimate creation of human society, and are today imposing themselves on their false traditional contraries, in the countryside and in nature. They impose with their far-reaching tentacles of transport and communications infrastructures, both the physical (bridges and tunnels, roads and railways, viaducts and equipment) and the intangible (telephones, Internet). Vast city networks that interrelate and connect with each other constantly, at varying rates and speeds throughout the world, gradually traversing continents and oceans, poles and cosmic space. Networks that connect, above all, individuals, citizens who share a similar way of life, increasingly blurring cultural and political barriers and, albeit to a lesser extent, economic barriers. Global time and daily time, fast and slow times, society and individual, everything has become urbanised since the beginning of this 21st century. Moreover, music, in all its forms, is one of the languages ​​of this planetary urbanisation, even, if not more so, in this structural crisis that has been spreading since 2007.

Cities have held, and continue to hold, the greatest concentration of the various music institutions. Conservatories, museums, auditoriums and concert halls come together in constant competition and collaboration to spread all types of music. On maps 112 and 113 of our Atles de la diversitat (Atlas of Diversity) (Barcelona: Enciclopèdia Catalana, 2004), we mapped these variables. Several authors, especially musicologists and cultural anthropologists (such as Dr. Joaquina Labajo, Eduardo Neve and José Antonio Calcaño, among others), have already developed many aspects of this relationship between music and the city. Music on the street, in public spaces, in the open air, is gaining ground from day to day and encompassing increasingly more people: music festivals, local festivities, concerts, commercial music. Sounds of all kinds strike up a counter-music with different registers: traffic and constant roadworks, fights and demonstrations, ambulance and fire brigade sirens, cassolades (banging of pots and pans as a form of protest), the radios and televisions of neighbours, cars. Silent witnesses of so many kinds of music, the citizens who run through the streets, go by public transport or bicycle, always isolated from their surroundings by their headphones, by a panoply of mobile devices. Thousands of people of all ages and from all walks of life generating the murmurous silence of individual, private listening.

This multiplicity of devices with thousands of noises and types of music would possibly have drowned out the traditional work-related songs, such as the cobblers’ chorus glorified by Wagner, or domestic fragments, not always in tune, of people cooking or showering. We could say that a recent symbol of this electronic silence that kills shared music, was the case of the teenage Russian athlete who was electrocuted in the bathtub when using her mobile phone whilst plugged in.

Urban landscapes, with their sometimes elaborate and creative forms, can also be part of this silent chorus of urban music. Silhouettes and details of the façades and skyline (the famous skyline of skyscrapers and tall buildings), sculptures and statues, advertising, urban furniture. Ephemeral landscapes and durable landscapes, here and there, recreate or replicate the form of different musical instruments, to make them resonate between sky and earth, in the spectator’s imagination. This further adds to the urban palimpsest, transforming buildings and streets to look like instruments for making music. This is what we can call true musitecture (Note 1).

The Museu de la Música de Barcelona, which has a collection of thousands of instruments of all kinds, leaves its confines to explore new information spaces, in search of more instruments, copies of those they conserve, generally extended throughout the public spaces of the city. The Museum thus encourages citizens and visitors to Barcelona to look at the city with new eyes. The great artists have left their mark everywhere, as have the musical instruments, such as Gaudi’s violin and Tàpies’ addition to Domènech i Montaner’s industrial building. However, beyond the creators, there are also instruments in the streets and in advertising. Just as one looks for the music of the spheres in cosmic space, one must look for everyday music in the city fabric of stones and asphalt.

Note 1: Although it is more difficult to form compound words in Romance languages, especially in comparison to Germanic languages and English, these trisyllabic words lend themselves to the formation of new words. Architecture is one example, with starchitecture, which refers to the works of globally-renowned architects, as with this term musitecture, easily formed to combine both arts in every way possible.