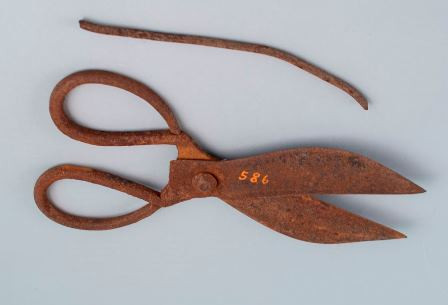 We all know that you can use an empty liqueur bottle as a percussion instrument, that Mahler used a hammer in a symphony, and that Leroy Andersen included a typewriter solo in the piece “The Typewriter”.

Well, at the Museum we have a pair of scissors (MDMB 586, acquired in 1948). If you look for information about it, you won’t come up with very much; and a search on MIMO (Musical Instrument Museums Online) will tell you that a similar object/instrument does not exist in any other museum.

In fact, they are not listed as scissors in our database, but as mikas guenaui, which could be a reference to the area where it was acquired, since Gnawa music (the singular form being gnawi or guenaui) originates from a Moroccan ethnic minority that forms mystical Muslim brotherhoods, mainly made up of the descendants of black slaves. In the variant of Arabic spoken in Morocco, the word for scissors is mqess. In classical Arabic it is maqas, which could have transformed into mikas, the name that appears in the Museum’s catalogue. These scissors are 31 centimetres long and come with a metal rod, making it a percussion instrument, an idiophone. According to Jaume Ayats, it bears a similarity to the espasí eivissenc (a sword-shaped instrument from Ibiza that has a metal piece for striking it with).

Our library boasts around 23 books containing information about African musical instruments, but the scissors are only mentioned in James Blades’ Percussion Instruments and Their Story, which explains that “Ibert [Jacques] uses scissors in the piece “Clown’s Dance“. And, in her book about Andean music, Mary Strong explains that “dancers hold scissors in their hands and use them for percussion.” In fact, the percussion technique of holding two drumsticks in one hand (for playing the marimba, for example) is known as “scissors.”

The only insight we have found – and a very interesting one at that – is in a post by Tim Abdellah in the blog Moroccan Tape Stash, where he explains that the Khouribga region of Morocco has a traditional genre, âbidat erma, whose shows involve not only the singing of ancient poems but also their performance by a number of dancers. It is an exclusively male genre, traditionally including only the more typical percussion instruments such as the tarija, the bendir and, distinctively, a pair of scissors with a metal rod.

Unlike other Moroccan instruments such as the qraqebs or naqus, the scissors allow you to modulate the timbre by opening or closing them. You can hear what they sound like, at minute 4’45’’ in this video: https://www.youtube.com/watch?v=aw7RkGl4I94&feature=youtu.be

Abdellah goes on to explain that, in the early years of the last decade, âbidat erma has experienced a resurgence in popularity. Although the reason for this is not clear, the showcasing of young performers on television has been a key factor. A recent video taken from Moroccan television shows some of the fun âbidat erma dances and pantomime that make this a highly popular genre.

This therefore explains why we are currently one of the few museums in the world that have such an unusual instrument as the Moroccan scissors, the maqas of the Gnawa brotherhoods.