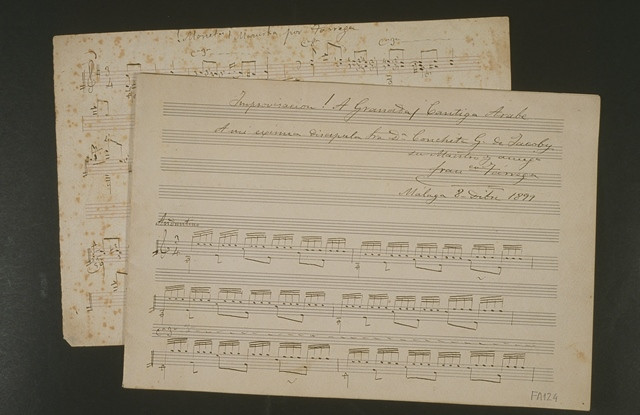 The manuscript score Recuerdos de la Alhambra left on 1 March 2022 for Granada, where it will form part of the exhibition Sobre la Alhambra en el arte moderno, which opens on 11 March and ends on 15 May.

In the five-page manuscript of Recuerdos de la Alhambra written by Francesc Tàrrega in Malaga, where he was on his way to Algeria, on the day of the Immaculate Conception, 8 December 1899, the original title of the piece, Improvisación A Granada! Cantiga Árabe, as the title Recuerdos de la Alhambra was fixed at the end of the first decade of the 20th century, coinciding with the publication of the piece by the publishing house Vidal Llimona y Boceta, a name that came from the title of the American exoticist-orientalist book by Washington Irving, Tales of the Alhambra, of 1832.

In addition to the change in the title, this manuscript has one difference from the published version: the ending. The original score ends on a chord that in the publication was transformed into a long arpeggio. It was created precisely as an offering to a 'Conchita' on her name day: Doña Concha Gómez de Jacoby, friend, disciple and protector of Tàrrega, and in memory of the visit they had both made to the Alhambra in Granada.

The document was the property of the composer Frederic Mompou, and became part of the collection of Fernando Alonso, with whom Mompou exchanged scores. Subsequently, in 2011, the document was put up for auction and acquired by Wolf Moser. In 2014 Moser deposited the score at the Biblioteca de Catalunya, to be kept in its custody while work was being done on the acquisition of the Alonso Collection. In 2016 Wolf Moser formalized the donation of the score to the Museu de la Música.

Recuerdos de la Alhambra is one of the most famous and world-famous compositions for classical guitar, which has been performed by a multitude of guitarists from all over the world, including Miguel Llobet, Andrés Segovia and Julian Bream. You can listen to Julian Bream's performance here.