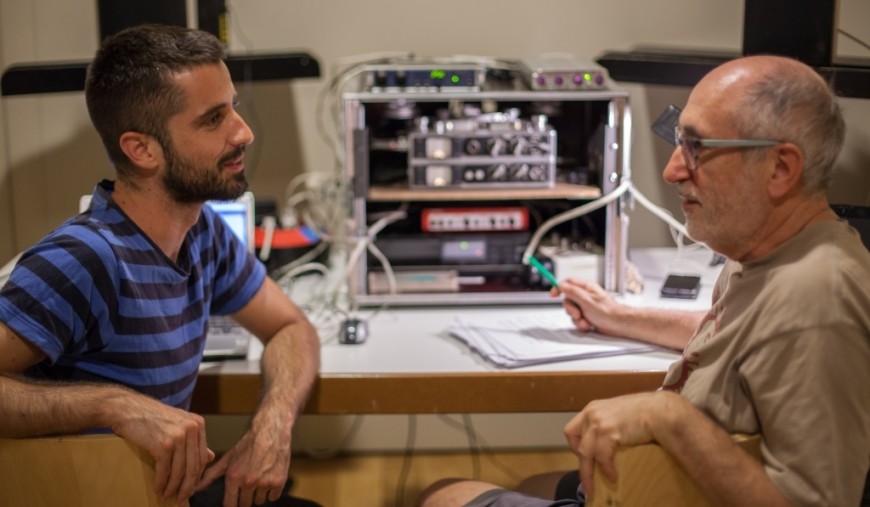 by Pep Gorgori, journalist and musicologist

I remember something Òscar Laguna said the day we started recording. ‘By the time I finish this recording, we’ll be the people who best know Hauslib’s claviorgan, because nobody for these 400 years will have spent so long playing it’. Wow! It’s moments like this that justify and make sense of all the effort and anguish those of us who make a living from music sometimes have to bear.

Taking part in the recording were Juan de la Rubia, Òscar Laguna, in charge of the maintenance of the organ and luxury bellows man, Paul Poletti, who took care of the extremely delicate spinet mechanism (I thought he was joking when he said he used wild boar hairs in some of the mechanisms springs, but no, it was perfectly true) and me, as chronicler and page-turner and trying to organise things as well as possible.

In the room next door, surrounded by mounds of cables and equipment, Pere Casulleras and Gerard Font were in charge of capturing the sound you can hear on the CD. We had worked with them before on the recording in Poblet, so we were also delighted to be reunited with Pere’s mythical spherical microphone, a wooden ball with two holes for ears. The quality of the sound, as on the previous CD, was a result of the care with which Pere put the claviorgan in a particular place, with the acoustic panels exactly positioned and everything worked out down to the last inch.

To be frank, we weren’t too sure about the claviorgan when we started recording. The initial euphoria at finding the ideal instrument for recording Cabezón gave way to fears that we might spend more time adjusting the mechanism and tuning it than making music. The claviorgan arrived in Room 4 first of all, as it needed a day to acclimatise to the minute differences in temperature and humidity there are between the museum’s keyboards room and the Alícia de Larrocha room. The Auditorium had to make sure the parameters remained stable for all the days the claviorgan was to be away from its habitat.

To continue being frank, we had underestimated the instrument. We may have been in need of sleep, inattentive, yawning and tired... but this venerable ancient of 400 years endured the whole recording without the slightest hitch. As our plans had foreseen difficulties, in the end we had so much time left over that we were able to have a bit of fun. This explains why there are two versions of El Canto del Caballero on the CD. We wanted to see what it sounded like with just the spinet and once we’d recorded it it seemed a shame not to let you hear it. There’s also a piece we added at the last minute, with a cry of ‘Hey, wait! What if...?’ I won’t tell you which it is, though.