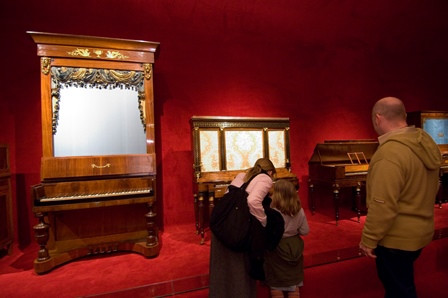 Reviewing the conservation status of the cabinet pianos

Storage rooms or deposits are a dynamic space in collections management. Although the permanent exhibition is the visible space of a museum, usually 80% of the objects are in storage rooms, spaces conditioned to store and preserve diverse heritage objects or, in our case, musical instruments. musicals, works of art and objects.

One of the multiple tasks we have in the storage rooms is periodically reviewing the conservation status of the objects. This allows us to detect any anomalies or defects in the work we are examining, with the aim of monitoring its conservation status over time. This review must be done after any movement of the piece - before or after a loan or a temporary exhibition, for example - but we must also make periodical reviews even if there are no movements, to have a physical control of the works.

In 2020 we reviewed the upright pianos after detecting a lack of information on the conservation status in most of these instruments. In many cases we only had a basic assessment: good, bad or regular, which had to be specified and developed from the physical analysis of the pieces. An interesting group within the pianos are the cabinet pianos, very representative of the Empire style and the technical developments of the piano as the dominant instrument in the domestic sphere during the 19th century. The Museu de la Música has seven cabinet pianos, two displayed in the permanent exhibition and five in storage rooms, all dated between 1820 and 1840. One of them is made by the English brand Broadwood, with whom Williams Southwell (inventor of the cabinet piano), held litigation over patent issues, as you can read here.

These reviews not only analyse the status but also check and verify the documentation for the work, correcting mistakes and adding data: for example, an undocumented inscription inside the instrument, or the serial number, which is often also found inside. This is the case of the cabinet piano MDMB 472, built by Manuel Bordas in 1840 in Catalonia. There is an inscription in pencil, "Josep Canet Roure La Bisbal", that we never detected before. So, this review provided us information from a previous owner that was not documented until now, which turned out to be a Catalan musician and composer, founder and director of the Cobla La Principal de la Bisbal from 1891 to 1894.

Periodical reviews are also an opportunity to update pictures of the piece or complete the existing ones with new detail captures, where you can see pathologies that will be stated in the conservation report.

Updating pictures is very important as a proof and testimony of the conservation status. A lack of systematic policies in the past regarding conservation and documentation led to some blanks on past interventions and restorations carried out on the pieces. In some cases we have been able to solve these lost links thanks, precisely, to the pictures.

For example, the MDMB 472 piano had only one leg instead of two. Although fragments or loose parts are usually documented, in this case did not have any information on it. Consulting our own photographic archive we discovered that this lost leg did exist and at some point it was relocated. Thanks to old pictures, we could search the leg and find it at last.

Another task was cleaning up the dust inside the instruments. See this before-and-after:

Thus, through seemingly simple interventions we not only guarantee a correct preventive conservation of the instrument, but we also expand our internal photographic archives, ensure a visual timeline of the works and unveil new, unknown details of the work.