“Soy de Pascuala Rodríguez y Pagés (I'm from Pascuala Rodriguez and Pagés). With this inscription, the guitar built in 1805 in Barcelona by Francisco España (MDMB 627) presents itself, and places us in the halls where its strings resounded. In the 19th century, women from the bourgeoisie and aristocracy were the ones who most often played the guitar in the domestic environment and "La Pascuala" is a precious testimony of the female use of the instrument. The decoration and refinement with which it is constructed indicate the high social status of the owner.

It came to the Museum as part of Orsina Baget's collection, deposited in 1932 and formally purchased in 1947. The guitar is accompanied by a music stand, a case and a handwritten score book decorated with watercolours that belonged to the first owner, Pascuala Rodríguez. It was built by Francisco España, a Catalan luthier living in Barcelona since 1820, where he began his work in association with the master Thérèse de Mirecourt. Around 1835 he separated from Thérèse and began to personalize his models, enlarging them, with Guarneri style acoustic openings (the F's) and with dark varnish that was not very transparent, achieving a very good sound. It was also at this time that he founded an instrument store and marked with his name flutes, clarinets, brass instruments and pianos that he bought in France to sell in Barcelona (Gran Enciclopèdia de la Música, 2000).

The España guitar has the strings arranged in four double and two single orders, with the harmonic table in the shape of eight and seventeen fixed frets. The sound board, made up of two spruce pieces, is decorated with simple marquetry fillets in light and dark wood. The mouth is inlaid with square pieces of mother-of-pearl on black paste and surrounded by simple fillets of ebony and light woods. Further outside, two ebony paste inlay circles complete the decoration of the acoustic opening. The bridge is made of rosewood or walnut painted black and has mother-of-pearl decorations on each side that extend with floral forms of walnut and mother-of-pearl above the sound board. Below the bridge we have an inlay of mother-of-pearl and ebony that is repeated to the batter, on the twelfth fret. The head has an ebony spade and mother-of-pearl inlay on which you can read the inscription "Soy de Pascuala Rodríguez y Pagés". The pegs are decorated with bone. The neck is made of pine, the bottom of cypress and the sides of mahogany, and these last two elements are varnished with colour to hide the difference in wood between them.

The album of handwritten music that accompanies this guitar belonged to a young woman from Barcelona of the high bourgeoisie called Pascuala Rodríguez Pagés, who received it around 1805. The luxurious binding is made of red leather, with an abundant decoration of vegetable and geometric motifs engraved in gold. Inside, there is a handwritten dedication and a portrait of the owner who presents her sitting on a chair, dressed in fashion, in a vaporous blue dress, of "empire" cut, girded under the chest, daring accessories and a feathered headdress of French style. The girl holds some sheet music in her lap, and points to a guitar lying on the floor next to her. Other scores and instruments, as well as a handwritten poem, complete the composition. The rest of the album is full of anonymous scores (possibly of popular music) of dances, songs and boleros, intended to be performed mainly with the accompaniment of the guitar. At the beginning of the 19th century, it was very common among the bourgeois classes, especially in "Frenchified" and intellectual circles, to hold long evenings usually accompanied by music and dance. The guitar had a great role in these evenings, since it could accompany the most diverse musical genres. 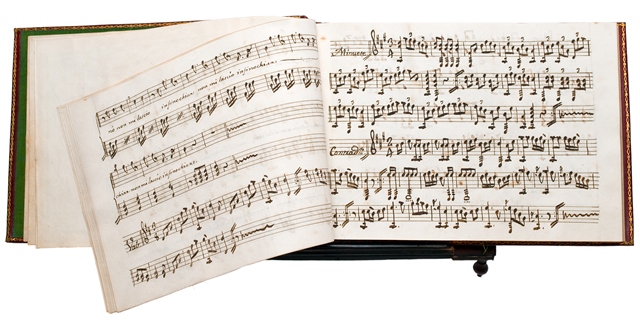 On this board of our Pinterest account you can see many other iconographic representations of women playing the guitar from the same period as Pascuala: https://www.pinterest.es/museumusicabcn/iconografia-de-la-guitarra-guitar-iconography/

women and musicmusic in artmusic instruments