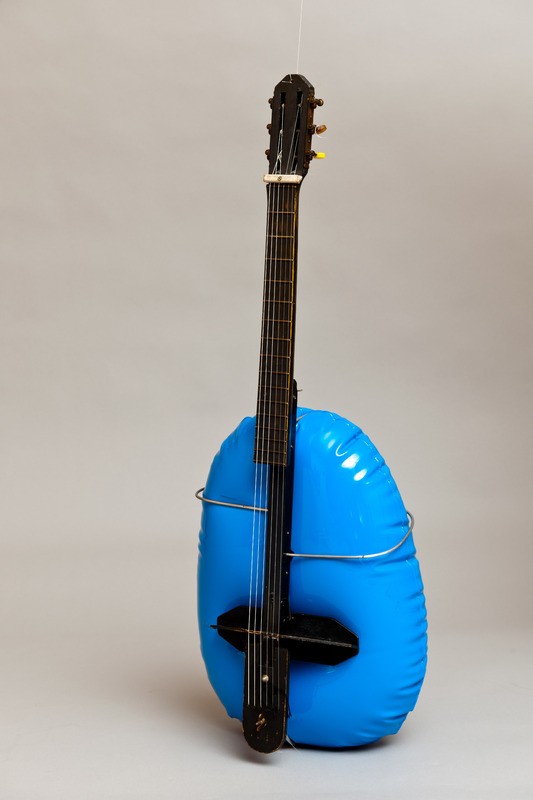 On July 1st the MUSIC (Museum of Ceret Instruments) inaugurates a new temporary exhibition: SUPERSONIC. En quête de l'inouï. The title makes a suggestive play on words: inouï as not listened, not heard, and also as unprecedented, unusual and extraordinary.

The exhibition presents instruments and sound artifacts outside the norm, and brings together constructors, artists, craftsmen, sound sculptors and creators of sound imagery. The Museum of Music participates in the exhibition with the loan of one of the most emblematic creations of François Baschet, the inflatable guitar.

Baschet devised this guitar during a trip, and made the necessity virtue: replacing the soundboard for an inflatable camping pillow and incorporating a folding neck obtained a lightweight, portable and economic instrument that later patented and that would be the seed of the whole Baschet acoustic universe. Once returned in Paris, he began to experiment with the sound and acoustics of musical instruments and to develop new instruments, new ways of perceiving sound and new sonic experiences. Baschet donated the guitar at the Museum of Music in 2011, and since then has been part of exhibitions and sessions open to the public.

The SUPERSONIC exhibition can be viewed at the MúSIC Ceret until July 1, 2018.