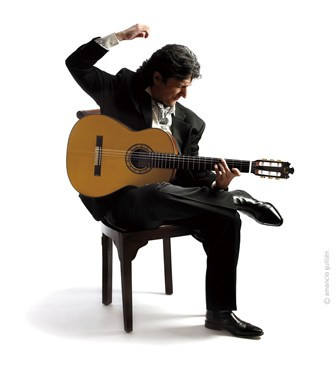 The guitars that Cañizares usually plays, including the 'Cañizares Model', were specially built by luthier Vicente Carrillo. The story of the origins of this model dates back to 2011, when Cañizares performed the Concierto de Aranjuez with the Berlin Philharmonic Orchestra.

Cañizares stated in one of the interviews that when he was appointed as a soloist for the European Concert of the Berlin Philharmonic, one of the first thoughts that came to his mind was "Which guitar shall I use to perform the Concierto de Aranjuez?"

Although classical and flamenco guitars may look very similar, we are talking about two completely different instruments in terms of features and sound.

A guitar that responds clearly and quickly to the attack of the right-hand fingers on the strings is required to perform certain flamenco guitar techniques such as picado, rasgueado or setting the tempo by slapping the soundboard. On the other hand, it is extremely important that the guitar is able to produce a deep, wide and powerful sound when performing a piece of classical music. Cañizares tried many of Vicente’s classic and flamenco guitars but was unable to achieve the ideal sound he wanted for that special occasion, a sound that would combine the most characteristic features of both guitars.

The turnaround came when he consulted his luthier friend, and together they reached the following conclusion: “Why not make a guitar that meets both needs for that special concert?” And that is how the long and difficult challenge of the two maestros began.

Both travelled over a dozen times between Madrid and Casasimarro, a round trip of more than 500 km, trying to create the perfect guitar. After testing and making changes, tweaking and gradually developing 'that' guitar over eight months, the 'Cañizares Model' guitar was finally born.

For the world premiere of the Mediterranean Concert in memory of Joaquín Rodrigo, Cañizares will use the highest end of the five existing models, known as the 'maestro'. In celebration of such a special moment, Cañizares and Vicente Carrillo will graciously donate a "Cañizares Model - Maestro" guitar (Serial number: CV-MA/004 Year: 2018) to the Museu de la Música of Barcelona to enrich its magnificent guitar collection.