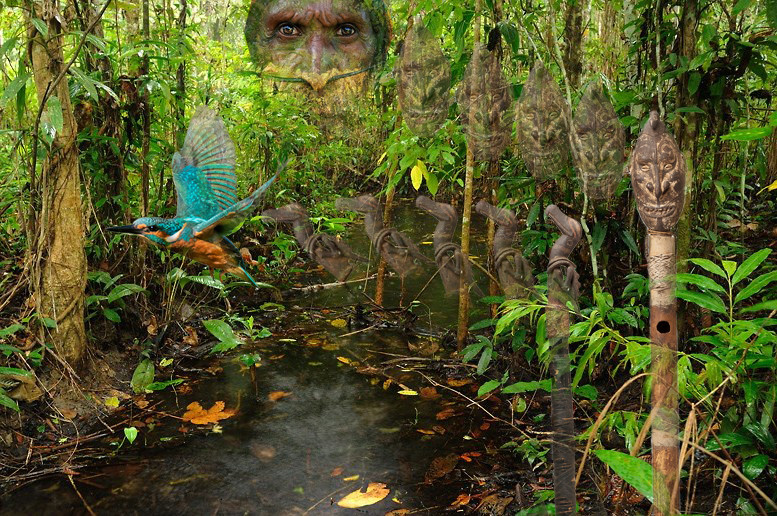 by Oriol Rossinyol, ex-head of Collections

Talking about the soul in a musical context is not particularly unusual. It is always difficult to express the feelings and emotions that music brings to our lives in words. For this reason, words with extensive, unspecific, deep and spiritual content can help us describe anything that would otherwise be indescribable, as is music. Besides, if we are talking about instruments then we can use expressions that search for something that goes beyond the subject. Think of the violin, if we look inside one, we’ll find a small piece of wood called the sound post, often referred to as the âme, a French word meaning ‘soul’. This is not surprising, as the slightest variation in the position of this part makes a great difference to the sound of the instrument. Not everyone can adjust the ‘soul’, so we’ll leave it up to the luthiers. However, today we’re not going to talk about this instrument, we’re going to take a trip to the other side of the world to search for something unknown.

The subject of our study is a flute, well actually, two transverse flutes from Papua New Guinea. The MDMB 1373 and MDMB 1374 flutes are two instruments that came to Barcelona Music Museum in 1970. They form part of an abundant collection of instruments acquired for the Music Museum by the former director of the Museu Etnològic de Barcelona, Doctor August Panyella, accompanied by the anthropologist and sculptor, Eudald Serra, and the collector, Albert Folch.

Both flutes are made of bamboo and are huge, over two metres long. They are decorated with braids made of vegetable fibres. They don’t have any holes to produce different notes, only a side opening near the covered end, like transverse flutes. The diversity of sounds is achieved with the different intensities of air that is blown towards the bevel of the mouthpiece (the edge of the hole), to produce harmonious sounds. At the top end, the end nearest the hole, each instrument is decorated with a wooden sculpture. The smallest flute is crowned by a bird and on the largest one there is a human face that looks like a Totemic mask.

What else do we know about these flutes? What do we know about this culture? Not very much at all, although we can say that they come from the Sepik region in Papua New Guinea, and they are ceremonial instruments that were used in male initiation rituals. We also know that they are always in pairs and can neither be used nor seen by women and children. What else? We have a rather confused idea about what the Totemic-style figures could mean. We can affirm that they are a symbol that acts as a link between the world of spirits, gods and ancestors. Perhaps all this is enough to be able to think that there are cultures that still live in relation with nature, and that their rituals are integrated into their lives. We possibly prefer to believe that our travels do not interfere with their own cultural development and we can see the wild essence of an unknown world. Needless to say, knowing there are objects that are forbidden to women leads us to think that we have come a long way. Perhaps that’s true, but we shouldn’t delve too deeply into the matter. 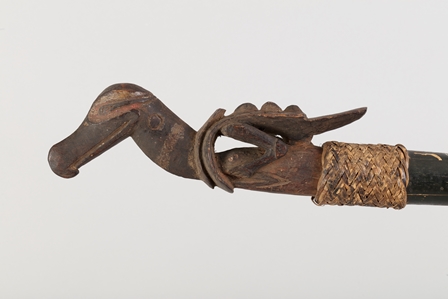 With this ethnocentric view, from the perspective of a European museum curator who has seen beautiful, exquisitely built instruments, decorated in an extraordinarily artistic manner and which produce remarkable sound, I am going to look at the two flutes from Papua New Guinea. Curious and original instruments. They are probably quite limited at a musical level, but obviously we don’t need to analyse them with our musical ear. They are ritual instruments, they were not used for musical purposes. In fact, it’s worth remembering the words of the musicologist, Curt Sachs, one of the founders of modern organology, when he referred to animistic cultures. He more or less said that in order to address the unknown forces of nature, gods or ancestors, it was necessary to mask sound; in other words, it was not possible to talk to the rain, wind, animals or our forefathers and tell the rain to stop once and for all, in a clear and transparent voice. A certain distance had to be kept, which is the reason for rituals, where the setting, the objects and the sound formed a whole. If we think of our religious and social rituals, of which we have more than enough, we understand that to make sure something works, it needs to be blown up a bit. In other words, if a bride wears white on her wedding day, the marriage will be much more successful for sure.

Let’s get back to the instruments, specifically the largest flute with the human face. The materials were evidently found locally. A wooden sculpture, a tubular body made of bamboo with a simple painted decoration and rings of braided vegetable fibres. In the middle of all this, there is a piece of tape made of a plastic material, what we would call adhesive tape, wrapped around the centre of the instrument. The critical eye of old European knowledge, in other words, the Museum’s technical team, criticises this lack of criteria that used such unsophisticated material to repair a possible crack. Having said this, it’s time to enter into action.

On this occasion, I had the privilege to perform the first part of the operation, and when the crack would become uncovered, I would rely on the restorer’s experience and knowledge. It was a slow process, every day I spent some time unsticking the tape with a solvent, working very slowly because I didn’t want to break the material. As a matter of fact, when working on a restoration we always have to keep everything we remove. The instrument’s life and history need to be documented, at least all that we do, and the reason why we do it. A few days went by and, I have no idea why, the excitement of uncovering the crack gradually increased. When the end of the tape was unravelled, I couldn’t have been more astonished, though I think I had already guessed the result. There was no crack, the bamboo cane was clean and intact. Two leaves of a plant that had dried out a long time ago lay on the instrument. The tape was the wrapping that safeguarded and hid the secret from inquisitive eyes. Maybe we could call it the soul of the instrument. The connection between nature and the object. Of the man with the totem, of the ritual with the desired effect.

I don’t know why, but at that instant the Tintin books came to my mind. It might have been The Seven Crystal Balls, I’m not sure, but I thought that a curse would fall on me. I had seen and touched something with my hands that was hidden from sight. Perhaps now I’m telling the story with certain humour. My concern for the unknown didn’t last long but I was left with a feeling of having invaded something that was nothing to do with me, almost a feeling of desecration.

At that time, I’m referring to the 1990s, it wasn’t easy for us to go online and connect with other professionals to share the discovery. However, we communicated with other conservators and restorers from other museums and their opinion coincided exactly with what we intended to do. Hide the leaves again and pretend that nothing had happened. So I got down to work, with the greatest care and respect, and I redid all the work of the previous days. I put the leaves back so they could rest in direct contact with the bamboo of the instrument and using the same tape, I hid them, possibly forever, from anyone’s eyes. I don’t know if everything is as it was originally. I have no idea whether the connection between the instrument and the spirit of the man who made it has broken. Quite possibly, if the relationship did indeed exist, it broke when the instrument reached the hands of our civilisation. Maybe now we should open our eyes a bit wider and respect that which we don’t know about. 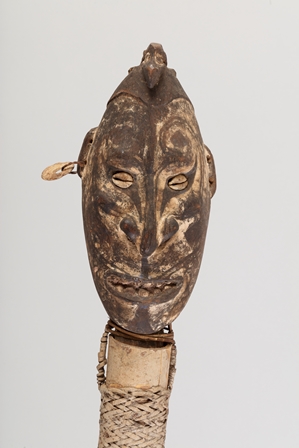 I can’t believe that it didn’t occur to me before. It’s not the first time that a certain culture uses foreign materials. The strangeness, scarcity and usefulness of adhesive tape in a context where nature is the only supplier of materials add extra value, which incomprehensible for us, in an urban context. It’s obvious that our eyes did not see the instrument in the same way as the people who created it.

We conserve, respect and venerate our history and we turn objects into representatives and connections with the past. Whenever we discover, study and analyse other cultures, our belief that we are the centre of the world is still too deeply embedded. I don’t know if what I saw on that instrument was its soul, I really don’t know. However, I’m quite sure that I was too far away from the flute I was holding in my hands.