In June 2017, Barcelona City Council launched the First Green Roof Competition to promote the creation of new green rooftops, with residents’ blocks, schools, health facilities, and others, among the ten winners. All these projects have a strong environmental, social and landscaping impact.

Between them, the ten winning projects have not only increased the amount of green space in the city by 5.500 m2, but they have added 217 m2 of solar panels and two windmills, four new rainwater collection facilities, and installations for wildlife such as ponds for amphibians, insect hotels, bird boxes, and an aquaponics system.

The ten winning projects were:

With private dwellings on the top floors and a school in the rest of the building. The roof is both a community-use space and an educational tool for the school community. There are plant species with substrates of varying thickness, both traditional allotments and others based on a hydroponics system, rainwater collection for watering, an insect hotel, and energy generation using solar panels.

Located on the crossroads between C/ Aragó and C/ Casanova, the building is comprised of three towers with 133 private dwellings, and the green roof is in the middle of the block. This way, all the users of the property can access it, including those with reduced mobility given that it has an adapted entrance, and the neighbours whose properties look onto the middle of the block can also enjoy the green roof.

Located in Porxos d’en Xifre, this green roof can be accessed by the whole community of neighbours. It is an extensive area with bushes, herbaceous plants and even some trees, in addition to an incorporated rainwater collection system. Other features, all of which are designed to self-supply the green roof, are electricity generation using solar panels and a compost heap created from organic waste.

Made up of a covering of succulent and bushy plants such as thyme, and vertically-growing vegetation to conceal the installations and cover the perimeter of the roof. It includes an energy-generation system using solar panels and it promotes biodiversity with bird feeders, nesting boxes, a pond and various insect hotels.

This is a social and employment integration initiative for people with an intellectual disability. The group’s leaders are responsible for the construction and maintenance of the green roof. It is divided into three different areas, two with plants and a third with a Mediterranean garden and a space for cultivation. It also has a large area of solar panels.

The Gran Via Parc old people's home has an edible garden with different horticultural species grown and eaten by the residents themselves. The use of adaptable, ergonomic modules, including the allotment tables, ensures that people with reduced mobility and even wheelchair users can enjoy the allotments.

An extensive roof garden with creeping plants, bushy plants around the perimeter guardrail, and climbing plants on the façade side, creating a new green space for relaxing. It includes solar panels, which are used to carry out practicals by students studying the renewable energies vocational training course.

A green roof with different horticultural species and allotment tables, which use the fertilizer generated by the compost heaps and the rainwater collected by the deposit, both located on the green roof. A small fish pond helps to fertilise an aquaponic area where leafy vegetables are grown. The water-related needs of the green roof are met using rainwater, which is distributed using a drip irrigation system, the pump for which runs on the energy produced by the new solar panel installation.

A green roof with semi-intensive vegetation, with creeping plants and bushes and a drip irrigation system. It also includes an insect hotel to improve pollination and solar panels.

This is a large landscaped green roof, which was previously inaccessible. The plant covering improves the thermal insulation of the building's interior and solar panels are used as an energy-saving measure. It is a space that can be enjoyed by the building's 250 workers and its numerous visitors. 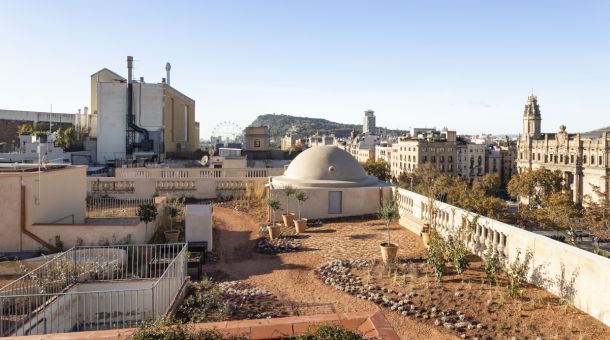 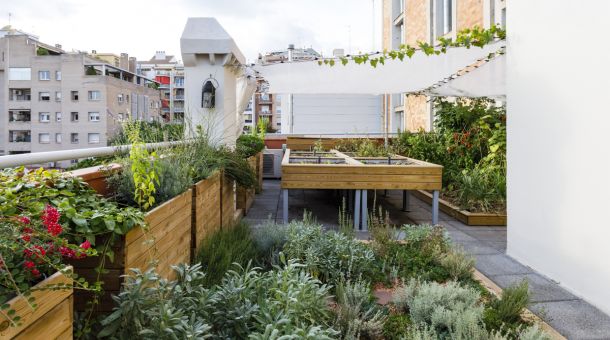 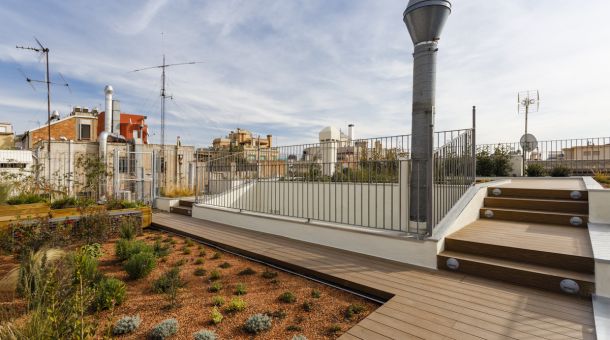 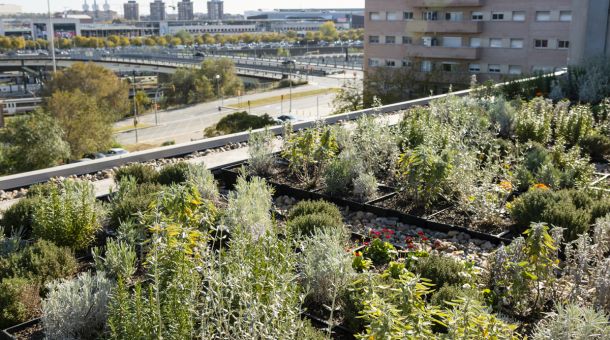 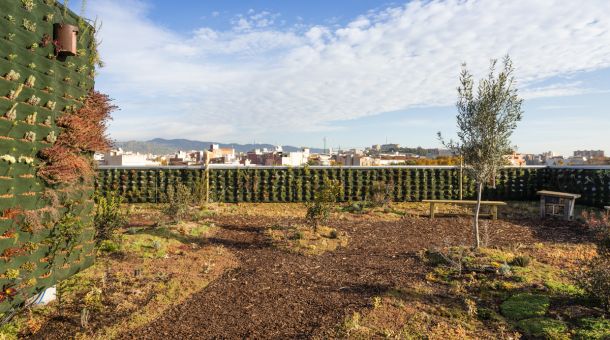 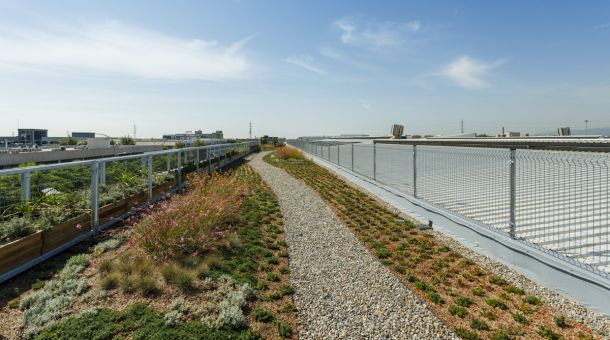 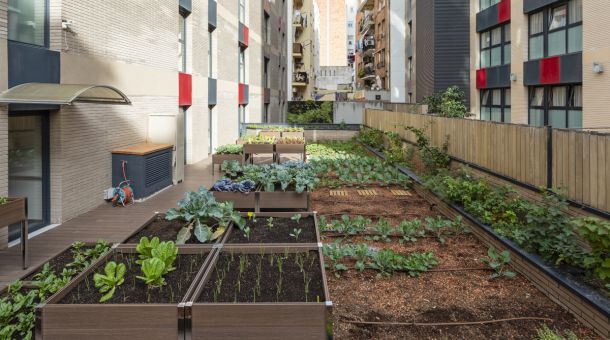 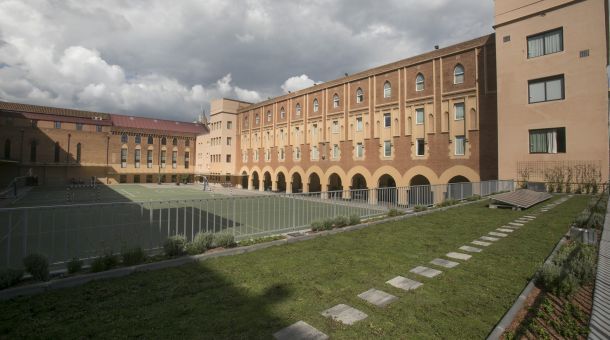