The constructed city has become a large metropolitan area with the same needs for territorial cohesion and environmental sustainability as Europe's major cities.

At the same time, the importance of neighbourhoods in this new reality makes it crucial for us to act decisively if we are to avoid territorial divides, ensure the same opportunities in all parts of the city and create an indispensable local space for social involvement and the generation of environments that promote public health and well-being.

It is in this context that the championing of and commitment to a city's most-prized asset, public spaces, are becoming a central goal. 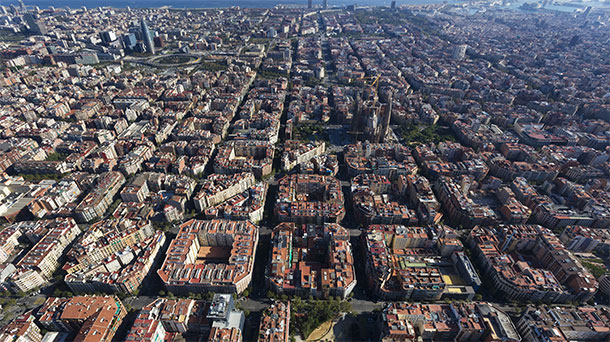 Superblocks are being introduced in response to the scarcity of green spaces in the city, its high levels of pollution and environmental noise and its residents' accident rates and sedentary lifestyles.

Barcelona City Council is making progress in reclaiming the spaces of the old penitentiary centre and the participatory process for defining its immediate and future uses.

Barcelona is internationally admired for the quality of its urban landscape, in which heritage is an essential, central and unifying force.

Barcelona City Council extends the ban on opening new souvenir shops around the Sagrada Familia, the Sant Antoni neighbourhood and the areas around Camp Nou, Park Güell and Casa Vicens.

"Let's protect the schools" is a project about the transformation of a school’s surroundings, putting children’s safety and well-being at the centre through various actions.

Urban planning with a gender perspective

To ensure optimum daily life without discrimination, across-the-board gender criteria will be applied to all transformation projects such as pacifying the Meridiana, the new bus network, the superblocks and the Neighbourhood Plan.

Barcelona City Council has proposed an amendment to the General Metropolitan Plan, which addresses and responds to the Commitment to Glòries and facilitates the continued development of all planned actions for this area.

The La Sagrera station and linear park project is an urban transformation project that addresses the improvement and expansion of the infrastructures in the area, within the framework of a city creation project.

The aim is to calm traffic along Av Meridiana and reclaim it as an urban road for the citizens and local residents of the neighbourhoods crossing and connecting it, turning it into a civic hub in the city along its section between Plaça de les Glòries and the Trinitat junction.

The project is a participatory plan for building a new neighbourhood model, once the plots of public land have been obtained, and by making the most of the strong local neighbourhood movement.

The aim of the Park Güell Executive Plan 2018-2022 is to reduce the impact of overcrowding and foster the communal use of spaces, as well as to improve mobility in the vicinity and promote a new management model.

Marina del Prat Vermell is one of Barcelona's brand new neighbourhoods, a territory that had historically depended economically on agriculture and livestock and which is currently experiencing rapid growth.

The process launched by the Les Corts district for renewing the Colònia Castells project was used as a pilot test for creating a new municipal action model for urban-planning transformation processes with such features, having effects on families and their housing.

Barcelona City Council and the Zona Franca Consortium reached an agreement on 2 December 2015 to reactivate the urban development of the old Casernes de Sant Andreu.

This is aid for improving the energy efficiency and accessibility of homes and to sort out any structural flaws to help to improve the quality of the city's building heritage.