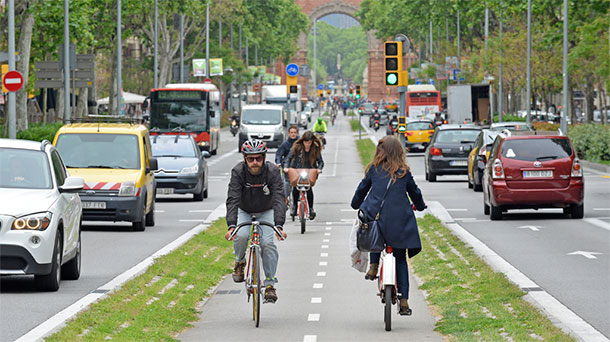 Barcelona is a city committed to a safe, sustainable, fair and efficient safety model, which is opting to give greater centrality to non-polluting means of transport, by increasing, among other measures, the use of bicycles as a usual means of urban transport in the city.

That is why the City Council launched the Municipal Government Bicycle Strategy Measure as a clear commitment to promoting the use of this vehicle as a sustainable alternative, with large environmental benefits, for private motor vehicles and as a way to reclaim the roads as spaces for positive community life for citizens.

Following a strategy on various levels for increasing its use, the Council is committed to improving accessibility conditions for bicycle users to ensure safer travel and minimise any conflict with pedestrians and wheeled traffic.

That means the current network of bike lanes will be improved and provided with better connectivity. A new 'Bicing' management model will also be established and a contract expected to be awarded towards the end of 2016, to make 2017 a period of transition and create a new Bicing system.

initiatives in several of the city’s streets and roads