Gender violence is a form of violence women suffer for the mere fact of being women within a patriarchal society and which results in physical, sexual or psychological harm or suffering, whether publicly or privately.

It is a key component of gender discrimination and a serious expression of the structural inequality that exists between men and women. It represents a violation of human rights as well as an obstacle for women to be able to freely develop under the same conditions and with the same opportunities as men. Feminism, by contrast, is a social and political position for the defence of rights and freedoms between men and women, and is an effective tool for guaranteeing a life free of gender violence. 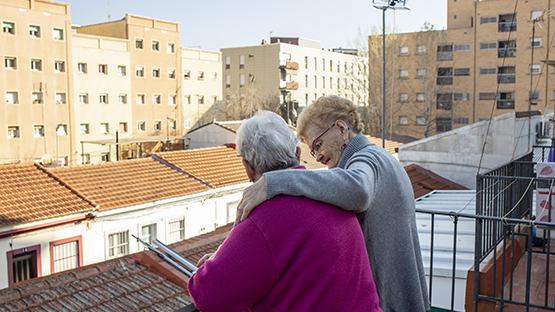 We need to debunk the stereotype that links gender violence to the lowest social classes. Violence cuts across all social groups and affects most women at some time in their life regardless of their socio-economic position.

The emotional ties established with assailants determines the capacity of women to detect situations of violence. Feelings of guilt and shame arising from the normalisation of such violence and the stereotypes that come with it may play a special role when it is the partner who is the assailant. On the other hand, the psychological consequences of such violence on women and their children need to be emphasised.

Gender violence is not exclusive to couple relationships. Sexual violence, discrimination on the grounds of gender and assaults in the work place are also part of the violence that men commit against women in family, social and work environments.

The impact of gender violence on children and teenagers can have long-term effects on their lives. In addition, in most cases, the assailant is from the victim’s family or environment, hence the difficulty in preventing attacks and assisting victims.

Men in general have more difficulties than women when it comes to identifying gender violence. Even so, a certain level of awareness and capacity for detecting such situations has been reached over the years, although the form of violent behaviour most recognised today is still the one associated with physical integrity, whereas psychological or financial forms of violence are less identified.