The Plan for Play in Barcelona’s Public Spaces is looking to move from a city with play areas to a playable city by 2030. Its aim is to improve and diversify opportunities for play and physical activity in public spaces, due to the great benefits these activities have for children’s and teenagers’ development and well-being and for health and community life.

The plan is the result of a cross-cutting process involving over 400 professionals, organisations and members of the public - both children and adults - and is inspired by pioneering play plans implemented in other cities, such as Dublin and London. It also responds to the United Nations’ recommendations to enhance the right to play, a specific human right for children and adolescents.

With this plan, Barcelona is seeking to achieve a paradigm shift, becoming a city with specific play areas that are more diverse, creative, accessible and inclusive while placing the entire city’s urban planning at the service of play.

The Games Plan sets out ten key projects to promote a change of attitude towards games:

Barcelona has over 900 children's play areas, spaces that the Games Plan intends to improve and diversify. However, the plan also proposes initiatives for increasing play opportunities in every area of public space, that is, wherever games are played spontaneously, by chance or occasionally.

The plan, then, works with the concept of recreational infrastructure and envisages initiatives for transforming play area environments, such as parks and squares, and even streets, playgrounds and school environments and sports venues.

Cross-cutting and coordinated work is being carried out with existing proposals.

A way of exemplifying the policy change with regard to play in the city is to include unique and appealing elements of play that offer a variety of play and exploration opportunities for children.

The first five elements were fitted in the following spaces in 2018 and 2019: 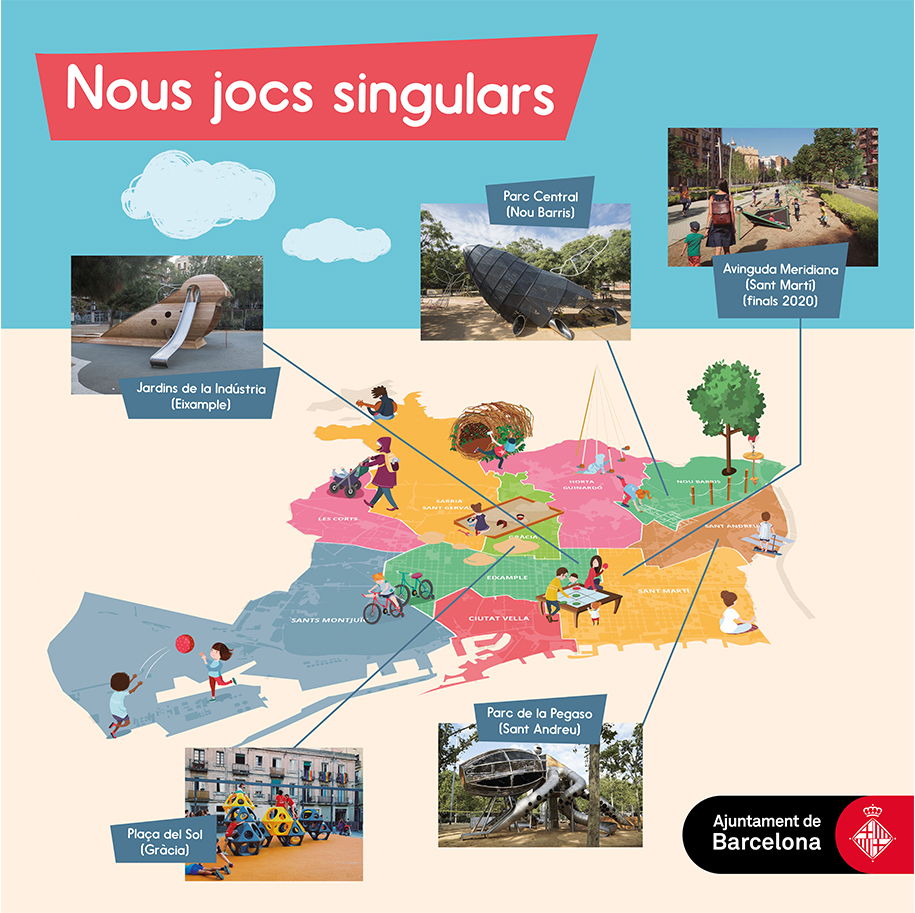 In addition to the ten projects driving the initiative and the provision of the five unique elements, the Plan for Play envisages ten key milestones to be reached by 2030.

See here for the full measure

Play and the City Conference

The Plan for Play in Public Spaces was presented in February 2019 as part of the City and Play conference held by the Area of Urban Ecology and the Area of Social Rights and with the support of the Barcelona Institute for Children and Teenagers. The conference featured, among many others, play researcher, consultant and activist Sam Williams, as well as Francesco Tonucci, an education specialist and researcher at the Italian National Research Centre who specialises in childhood and the city.

The Plan for Play in Public Spaces is the result of the “Barcelona plays things right” government measure approved in February 2018.

This measure responds to the challenges of promoting play in public spaces and everyday life, includes those actions already developed or in progress in recent years and identifies the actions planned for the years 2018 and 2019 to define the Plan for Play in Public Spaces 2020-2030.

projects that encourage a change of attitude

unique and appealing elements of play

Doubling the number of play areas that provide recreational activities and diverse and creative play.

Reducing and eliminating play areas of less than 50 m2 that do not provide enough recreational activities.

Creating ten spaces for splashing and cooling down with water, and increasing opportunities for playing with sand.

Promoting outdoor shared and collaborative play and group physical activities, with a goal of 50% of play elements that encourage people to play together, as well as 250 table tennis tables and 150 basketball baskets.

Increasing opportunities for play for people with functional diversity, ensuring that 100% of refurbished areas are certified as inclusive.

Achieving 40% of play areas with nearby water sources, 90% of green areas with drinking water, 20% with public toilets and 75% of parks and gardens with picnic tables or similar.

Ensuring that 60% of public schools have suitable playgrounds with community uses (at least 120 playgrounds).

Carrying out actions in around 100 school environments to turn them into places for spending time in and socialising with others.

Reducing the sedentary lifestyle trend, promoting outdoor play among the city’s children and teenagers and reducing physical inactivity rates. Reducing the percentage of children who never play in the street to less than 15%.